What is biochar and how can it influence C sequestration?

Biochar is charcoal produced through pyrolysis, where organic matter is heated with limited or no oxygen. During this process, several bio-products are released which can be used as bio-fuel (more detail later) and the end-product biochar is produced. The quality obtained is depending on the type of organic matter used and the process applied (temperature). The most important factors determining the quality are the adsorption and cation exchange capacity and the low levels of mobile matter (tars, resin, and other short-lived compounds). The amount of C in the biochar depends of the type of feedstock used. For example, woody feedstock tend to have a higher C level, compared to herbaceous feedstock.

The role in climate change
During pyrolysis, bio-oil, biochar and gas are produced. To make this sustainable, all three products should be used as bio fuel. Second, carbon is fixed in biochar into a more stable form (highly resistant against biological and chemical degradation), and when the charcoal is applied to the field the carbon is being sequestered. In addition, biochar adsorbs organic matter and prevents their rapid consumption by soil microbes. This will reduce the amount of CH4 released from the soil so sequester even more C to the soil. Eventually, this leads to a stable humic matter. To have an even more sustainable model for biochar production, often green waste from landscaping is used (eg. clippings from agroforestry).
Gupta et al. (2019) say that converting biomass C to biochar leads to a storage of 50% of the initial C, compared to only 3% of the C remained after burning and 10-20% of C sequestered after biological decomposition.

Other beneficial effects
Positive influence on plant growth, less nutrient leaching, better water retention and improved microbial activity. As some studies showed an increase in above-ground biomass of the plants, others showed interference of plant growth due to too high levels of biochar. This decrease in plant growth can be linked to the pH level of the soil and the biochar. Depending on the temperature during pyrolysis, pH level in the biochar will be different (at low temperatures the biochar will be more acidic, compared to the production on high temperatures). When the soil becomes too alkaline, nutrient uptake in the plants is impaired. Also, high levels of mobile matter might influence the plant growth negatively.  For this, the optimal application rate depends on the soil type and crop management. In addition, biochar will also bind heavy metals and pesticides and help in this way in contaminated soils.

Way of application
When no biochar is applied, the C build up in the soil is a slow process. Using biochar may fasten this. Ideally, the biochar is added on the field and worked into the soil via tillage. However, some crop production systems do not allow this. Than the biochar can be applied to soil surface and covered with organic matter, mixed with compost or mulch, or applied with liquid slurry (if finely ground).
And as explained before, the acidity of the soil is also an important factor to determine the amount and type of biochar that should be applied. 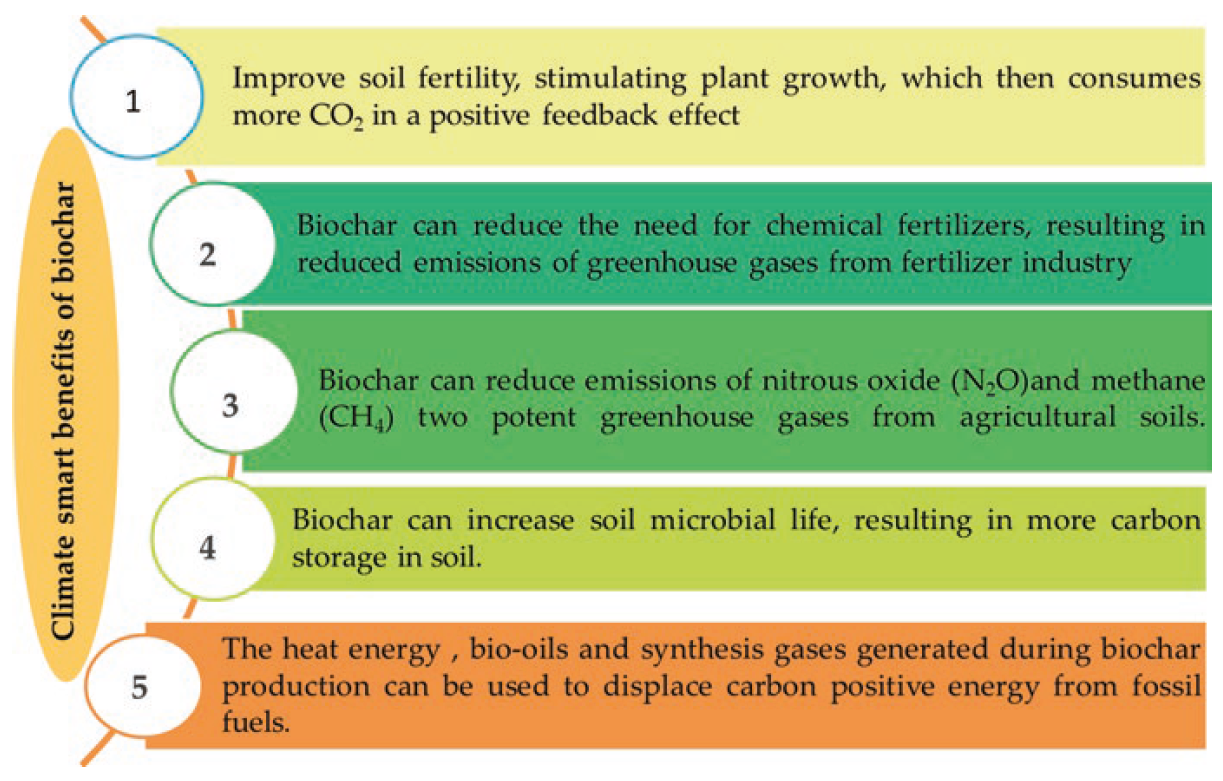