On a farm with an average livestock of 50 Glanrinder a severe case of digital dermatitis led to unusually high veterinary costs, many lame cows including the stud bull and the uncertainty how the illness will affect the farm in future.

The animals are grazing during summer time and housed in a loose barn in winter. The resting area is interspersed with straw and splatted floors are provided in the feed alley. During housing time, the animals are fed with hay and grass silage. During the summer of 2020, the farmer decided to provide extra feeding for the animals, as there was a shortage of grass due to the dry weather conditions. Therefore, in addition to the grazing he offered clover-grass silage as feeding for the cows. Another change that probably led to the issue of digital dermatitis was the additional purchase of heifers from another farm. Both changes together led to the outbreak of digitalis dermatitis in numerous cows and heifers and the stud bull.

All animals affected had to be treated by a veterinarian, bandages with acetylsalicylic acid ointment had to be put on the affected legs (on some animals repeatedly), some animals even had to be treated with antibiotics as the inflammation started to affect the tissue above the hooves. The stud bull didn't mate during his own treatment as he suffered from severe pain in his hind legs. 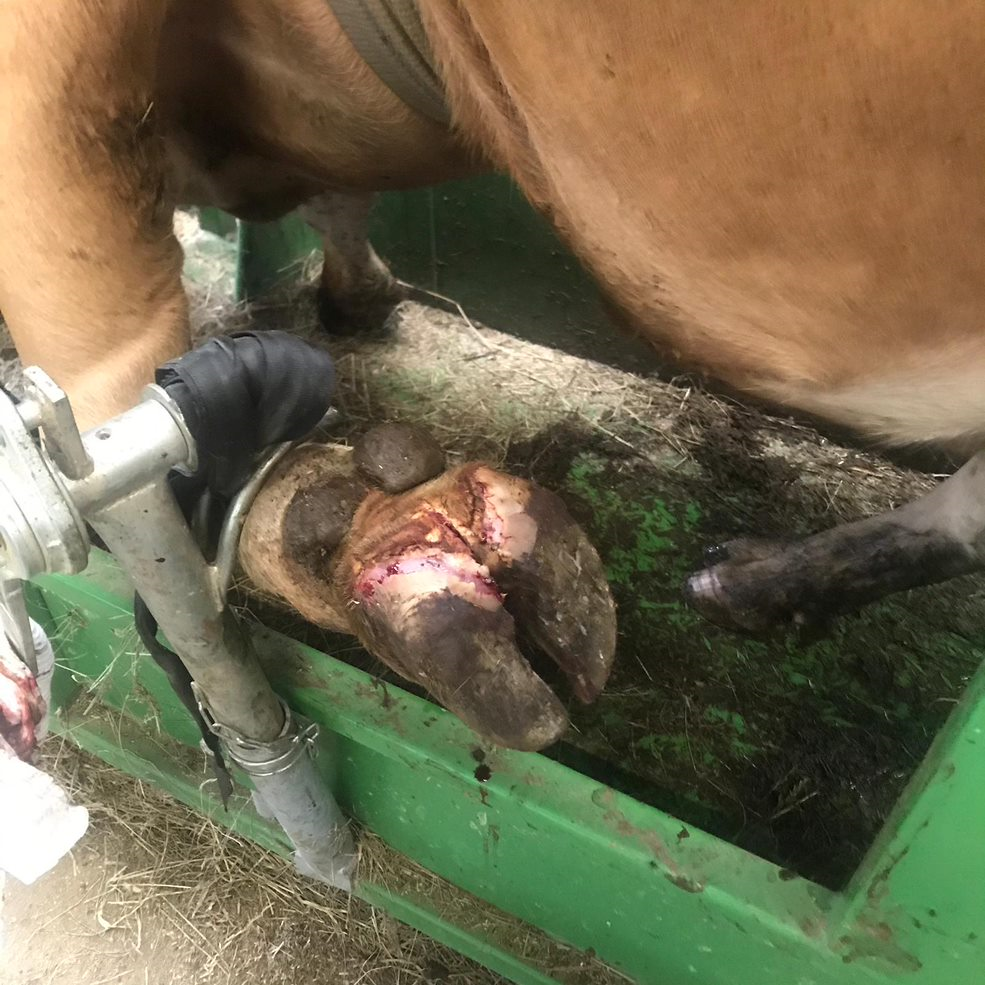 Parallel to the treatment of the affected animals the farmer and the veterinarian went trouble-shooting and soon found the change in feeding and the additional purchase of heifers as main risk factors for the outbreak of digital dermatitis. The heifers from another farm probably brought in the pathogens and the sudden change of feeding was the precursor for the bacteria to be able to affect the horn of the claws.

The development and implementation of a treatment plan took about four weeks. Clover-grass silage feeding stopped immediately. Two different footbath solutions were used alternately for disinfection and care of the claw horn. The animals were fixed in the feeding fence then the claws were cleaned with a water hose. The footbath solution was then applied with a special sprayer. According to this protocol, the acute phase of the disease was completed. The farmer was instructed how to apply bandages and how to detect new lesions. A protocol for regular assessment of the claws of all animals has been developed and is now performed once a week by the farmer. Animals with new lesions are treated immediately. Animals without lesions are treated with disinfectant or a conditioning footbath solution after assessment. The use of the footbath solution must be continued consistently because the pathogens cannot be eliminated from the animals' environment. Only the onset of the acute disease can be controlled by appropriate measures.
The treatment and prevention plan results in fewer acute lameness in the herd, faster recovery due to early treatment and a decrease in veterinary costs. In addition, herd fertility is significantly improved.
For this, the farmer had to learn to recognize new lesions very early. After a few weeks of practice, the farmer developed very good judgment. Strict adherence to the protocol for assessment is a key factor in the success of the treatment program, as is the use of the footbath.

Important pillars in the control of acute disease with digital dermatitis are quick action and a practicable protocol!