Dynamic rotating grazing is based on dividing meadows into small plots that animals graze for a short time with a high load. It aims to maximize the productivity of grasslands and to make the most of them through grazing, in an efficient way for animals and at very low cost.

The idea is to graze the grass when it is at the right stage, that is to say when it offers the best quantity/quality ratio, and then give it a rest period so that it can replenish its reserves.

The farmer divides his plot into small sub-units and organizes a rotation so that the animals do not return to the same plot before 3 to 4 weeks. The grass thus proposed is of consistently high quality, and the breeder can more easily manage situations of deficit or excess grass.

The animals do not stay more than three days on the same plot, the ideal being to change them every day. From the 4th day the regrowth has reached a sufficient height to be grazed and would risk being consumed as a priority, compromising the replenishment of plant reserves.

Maintaining a rest period for grass improves grassland productivity, the farmer can graze more animals on a constant surface or clear more areas for mowing and improve his food self-sufficiency.

In this system the soil/ plant/animal relationship is strengthened: the roots and droppings of the animals "feed" the soil fauna, which activates a whole virtuous biological mechanism leading to the release of essential nutrients for the plants.

The 9 breeders monitored thus grazed an average of 0.47 more LSU per hectare on their areas engaged in dynamic rotating grazing. They were able to feed more animals per hectare thanks to increased grassland yields.

Grazed at the right stage, the grass is of better quality and the animals ingest more, with better productivity of the herd (better average daily gain).  In the 9 suckler farms, the amount of live meat (VV) produced increased wherever loading had increased. The average increase is + 54kg of meat meat per hectare of permanent feed area

The root development of plants is maximal, able to mobilize the water present in the soil, so plants are more resistant to drought

The optimization of grazing gradually leads to the regression of weeds (rumex, dandelions ...) as well as the development of clover, with less herbicides.

Accustomed to frequently changing paddocks, the animals are more docile, it is a time saver during handling and more safety for the breeder 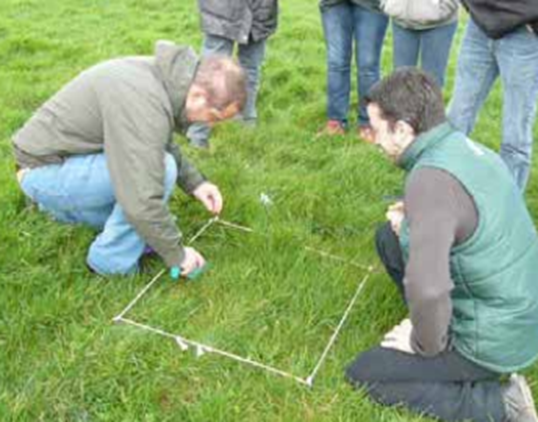 According to Olivier a calf-fattener in the 62, in dynamic rotating pasture since 2013 : “I started dynamic rotating grazing in 2013 with the goal of producing more grass while being more environmentally friendly. I was able to gradually increase my load and today I graze about twenty more animals than in 2012. I also reduced my nitrogen inputs on the 26.5 ha of meadows by 63%, a saving of about 2000 €. Although I have removed the feeder my animals are in good condition, sometimes even a little too much! I will not go back for anything in the world. For 2016 I plan to drive other meadows in rotating pasture. An idea of my father who was very reluctant at first! “