Mixed cropping is the simultaneous cultivation of two or more crops on the same land. This system was applied in agriculture thousands of years ago, but due to fertilizers and pesticides, it lost its importance. In this way, using mixed crops is an interesting way to increase biodiversity in arable fields and crop rotations.

Description of the innovation

Nowadays the sector is focused and optimized on sole crops. Crops are grown in pure stands and processing firms are not adapted to process mixed yields. However, mixing different crops (legumes and non-legumes) may save synthetic N fertilizer, improve yield stability, increase soil fertility, and suppress weeds, due to higher biodiversity and different functional plant groups, and make better use of available resources such as nutrients, water, and light.

Perennial forages can be divided into three groups: grasses, N fixing legumes, and other herbaceous species. Species belonging to different groups should be more complimentary, however, growing two different types of grass together will also influence yield positively. The reason to use legumes in the mixture is the N-fixing characteristics these plants have, which influence growth. In addition, nutrition quality is better. For example, adding red clover to the grass will improve protein and crude fibre content while adding alfalfa improved neutral detergent fibre concentration and digestibility.

Other non-leguminous species (forages herbs) that can be used are ribwort plantain, chicory, and salad brunet. They improve nutritional quality, and increased plant diversity, competitiveness, and tolerance to different weather conditions. Also, these forage herbs are rich in minerals that need to be considered if feeding extra mineral supplements.

In the Netherlands, different farmers are busy with different combinations of mixed cropping: 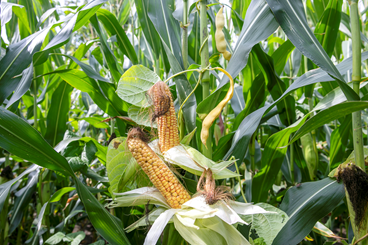 Farmers’ Benefits is a project in Belgium where maize is grown in combination with climbing beans. It only started this year, but the setup is based on a preliminary test with good results.

Within this project, they will look for the best combination of maize/beans and how best to fertilise (leguminous plants fix N, so less N input or similar yield).

Challenges of mixed cropping are for example weed management and competition. Competition for resources changes during the season; at the beginning of the growing season, plants will compete mainly for water and nutrients, while later on, they will compete for light. In addition, the properties of the species will also determine the dominance, for example, deep-rooted species will restrict the growth of shallow-rooted species, as they have more access to deep soil moisture and nutrients.

More nutrients are removed from the soil, compared to sole crops. This should be taken into account, especially for fields with limited availability of nutrients.

When applied well, mixed cropping can improve the sustainability, productivity, and yield of the crops.

Under the mixed crops, fewer weeds and other unwanted species are present as fewer resources are available for the weeds. Leading to a lower amount of weeds in the dry matter yield (10-60% in sole stands compared to <5% in mixed crops).

As more diverse plants are present, and less fertiliser and pesticides are used, biodiversity will be positively influenced. More insects will come to the field, which also attracts bigger animals.

Things to keep in mind

Crops should be adapted to each other. It is possible that one crop can take nutrients or light from the other. Not all crops work together. Also planting pattern and population needs to be considered.

Socio-economic resilience: Cost for extra crop and less fertiliser needed
Animal health and welfare: xx
Production efficiency and meat quality: Combining maize for example with clover will increase protein content of the ration and positively influence animal production
Environmental sustainability: Positive for biodiversity, both aboveground and in the soil, due to lower fertiliser and pesticide input