Castration of young bulls, prevention of early pregnancy of heifers 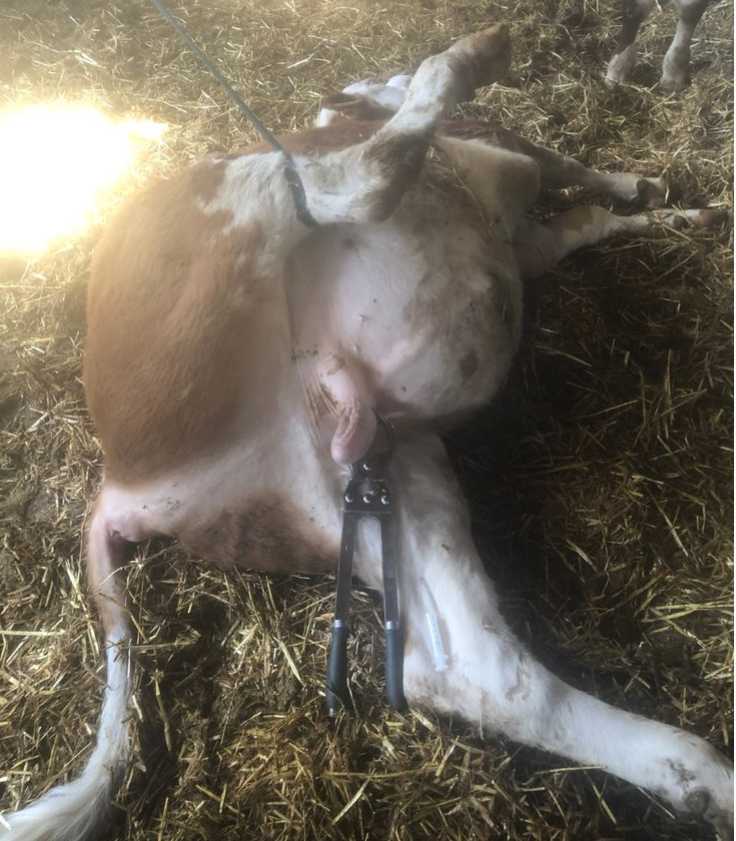 On a farm with an average livestock of 50 Glanrinder the problem of early, unwanted pregnancy occurred in approximately one quarter of the young heifers. The cows and heifers are grazing during summer and are housed in a loose barn interspersed with straw in the resting area and slatted floor in the feeding alley during winter. In winter, the cows are fed hay and grass silage. The stud bull accompanies the herd during the grazing period. Inside the barn the bull is housed in a separate pen.
Calving season is mainly between February and April. In the middle of October, when the grazing season ends the male and female heifers were separated and held in different pens within the barn. Every year some of the female heifers were already pregnant. If a pregnancy was noticed, an abortion was initiated by injection of prostaglandin. In some unnoticed cases, Caesarean section was necessary to deliver the calf without causing severe harm for mother and calf.
Sexual maturity is to be expected at the age of eight to ten month in female heifers and at the age of nine to eleven months in male heifers. Breeding maturity in female cows is reached at the age of 18 months at the earliest. The first calving should take place at the age of 23-24 months. To prevent the unwanted pregnancies in young heifers the good practice of castration of the young bulls was implemented.
Between two calving seasons the farmer and the veterinarian agreed to castrate male calves as a prevention of early pregnancies. When the first calf was born, calculating seven months into the future was the time for castration. With this time span the first born calves would be at the age of seven months when castrated. As the farmer was worried about remembering the right date for castration due to high workloads a reminder by mobile phone alarm was implemented.
Bull calves born in February or first half of March were noted for castration within the first two weeks of September. Bull calves born between the middle of March or in April were noted for castration one month later (within the first two weeks of October). Bull calves born later were either separated when grazing season ended or castrated at the age of six to seven months. The castration was performed under anesthesia with ketamine and xylazine by use of the Burdizzo Tongs to prevent circulation of the testicles. The testicles then degenerate and are unable to maintain spermatogenesis. After implementing the good practice, no unwanted pregnancies have occurred. Male and female heifers can stay in the same herd and the oxen are calmer and easier to handle than bulls.