The main income of suckler cow farmers comes from the sale of calves. The loss of young animals consequently results in a large loss of income. Since calf mortality is highest around birth, frequent monitoring of calving is advisable. This enables early intervention in the event of complications and can be life-saving for cows and calves.

A prediction of the time of calving can be helpful in order to keep the time required for monitoring the birth low. Numerous methods for predicting the due date with the help of technical devices have already been tested with varying degrees of success.

The France-based company MEDRIA sells the so-called Vel‘Phone® for birth monitoring in cattle. With this system, a thermometer equipped with two spider-like soft support nets is applied intravaginal with an input aid. The temperature sensor regularly measures the vaginal temperature and sends current data to a mobile phone via the telephone network twice a day. In addition to this information, the transmitter is expelled intra partum through the amniotic sac, which is also communicated via a short message (MEDRIA, 2010; LISTE, 2014).

MEDRIAThe iVet® system from Germany works in a similar way. It consists of a vaginal brace as a transmitter and a receiver in the stable that can send messages to up to 2 mobile phones. If a vaginal temperature is measured in the course of the monitoring, which is at least 2 ° C above the target temperature, the recipient sends a one-time message to a mobile phone with the request to check the animal. When birth begins, the brace is pushed out of the vagina. The light sensor at the brace activates the alarm and the farmer then receives a voice message on his phone via the recipient. Unfortunately, this system has so far only worked reliably with Holstein cows (List 2014; Dippon 2015) 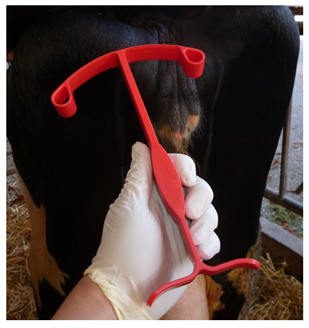 Conclusion: There are sensor systems to predict the onset of birth and inform the farmer. Compared to video cameras, these systems can also be used for grazing animals.