In Ireland a demonstration was organized for the research Innovation about Pelvimetry. A presentation was given to a group of beef farmers that visited a demonstration farm in the west of Ireland. On the day the piece of equipment was shown to farmers and a presentation of how it can reduce issues with mortality was described. An example video from a beef farm in Germany was used. The ability to predict a heifer that will give difficulty at calving was thought to be of benefit by the farmers. One farmer indicated that she would then know in advance to call the vet and would not rely on a neighbour to provide assistance. Another farmer indicated that by measuring the pelvic area at an early stage he may be able to market his animals differently.

It was agreed amongst all participants that the technique may be difficult at first to carry out without good instruction. One farmer suggested that in order to offset the cost of buying the Pelvimeter it might be useful to have a trained person who visits a number of farms to carry out the procedure. Some farmers indicated that they generally have no issue with dystocia as they breed their heifers at an older age. However, they understood that by using this device it may allow for the age at breeding to be reduced in some animals. The cost of purchasing the equipment was the main cost identified. They enquired as to the exact cost of this and whether they may need to attend a training session. The savings were predicted by the farmers as being from the reduction in problem calvings on farm. Farmers indicated that with the potential to avoid neonatal mortality and a culling of the problematic animal involuntarily the cost of the equipment would be minor in comparison. All farmers agreed that it may be a potential saving overall. The majority of farmers would recommend this innovation to other farmers which are practicing 24 month calving of beef heifers. They understood that the potential savings from less calf mortality and reduced stress on the heifer/cow would be highly beneficial on suckler beef farms. 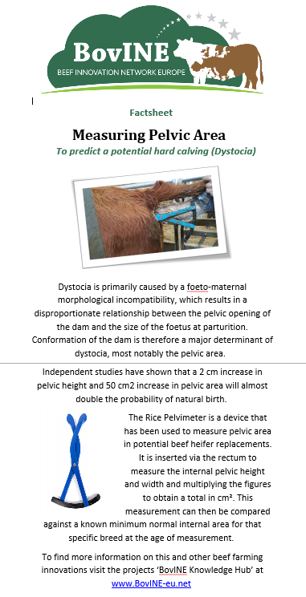