Low stress Stockmen Ship is a method for working safely and efficiently with all types of cattle. This method is used with cattle as well as suckler cows and dairy cattle and also works with bulls. Direct contact and loud noises are completely avoided. The animals are moved, stopped or turned by approaching them and, if the response is successful, moving away again. 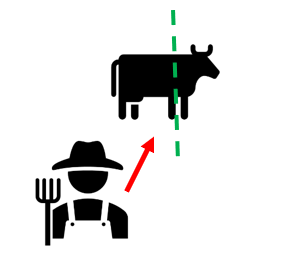 Another important line is the spinal line. It runs centrally from front to back across the animal. If the handler stands in front of or behind the animal (Attention there is a blind spot directly behind the animal) and moves to the right side of this imaginary line, the animal will move to the left and vice versa.

When moving a whole herd, it is advisable to approach the herd in a zigzag movement and again, as a reward for going forward, the person stops or even goes back a few steps.

Originally this handling method comes from the USA, but in the meantime, there are also various seminars on this concept in Germany (as probably in all of Europe). With this method, driving is low-stress for the animals and the risk of accidents for humans remains low. The complete teaching of Low Stress Stockmanship is described in the English book “Stockmanship and Handling Cattle on the Range” by Steve Cote. It is available for consultation on Temple Grandin's homepage.