The Mertolenga beef cattle breed is from southern Portugal and represents about 4% of the national suckler herd with nearly 24,000 cows (50% controlled by the Herd Book). 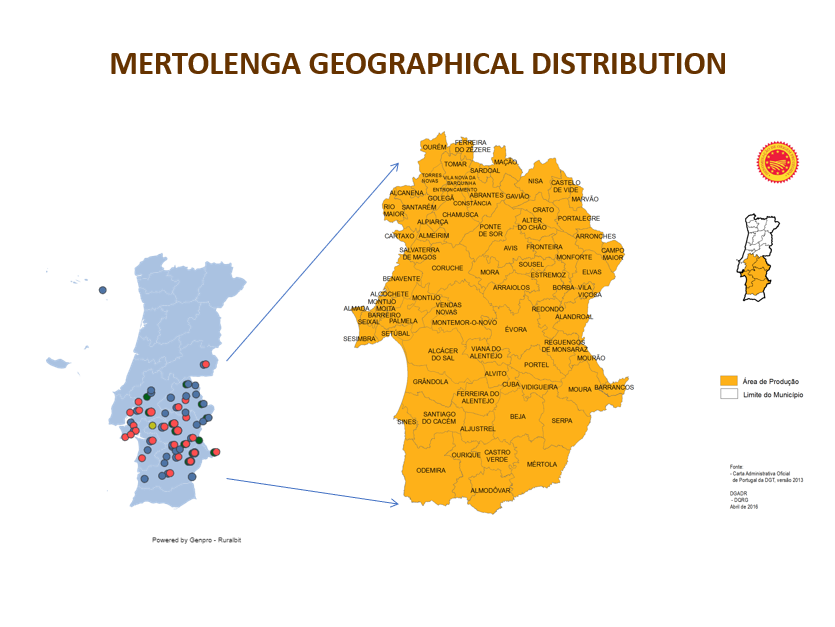 It’s a medium sized cow with good maternal traits and well adapted to the production system in which it is used. The production system is totally extensive. Mertolenga meat received PDO status from the European Union in 1996 and is marketed by a producers organization called Promert - Agrupamento de Produtores de Bovinos Mertolengos S.A., created in 2006. 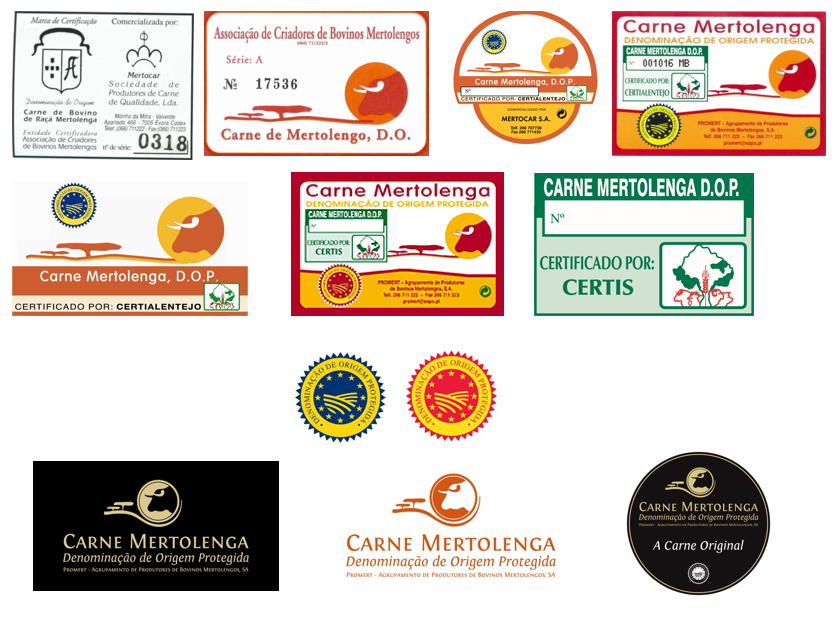 Mertolenga's characteristics are an additional advantage in beef cattle production, because it is a breeding cow with excellent maternal traits, which makes it used in the production of crossbred calves, and at the same time a setback in the production of Mertolenga PDO beef, due to the relatively low weight at weaning (150/170 kg at the age of 210 days) and the low average daily gain after weaning (purebred calves), when compared to other continental breeds.

In the early 1990s, the supply of beef in Portugal was unfavourable to producers. The market consumed heavy carcasses (more than 250 kg) which for Mertolenga is difficult to achieve at a young age. The weaning calf market for fattening and finished animals for slaughter was in the hands of traders, fatteners and other actors in the food supply chains, who set the prices. There were no producers organizations that marketed their products.

In short, the bottleneck for Mertolenga producers was identified in two points:

With this scenario, a group of producers from Mertolenga created the first company to commercialize Mertolenga PDO beef in 1994, which worked until 2005. In 2006 Promert was created to continue the work started by its predecessor.

In the beginning Promert granted the sales operations to another company ensuring only the production and the supply of animals for slaughter. At this time Promert did not have technical staff and was working with ACBM (Mertolenga Cattle Breeders Association) support. Today Promert is a small company with two full-time people on staff and a part-time specialist in meat processing and sales who is responsible for the whole process after slaughter.

The entire commercialization process of Mertolenga PDO Meat is controlled by Promert through outsourcing and it can be described in five steps. 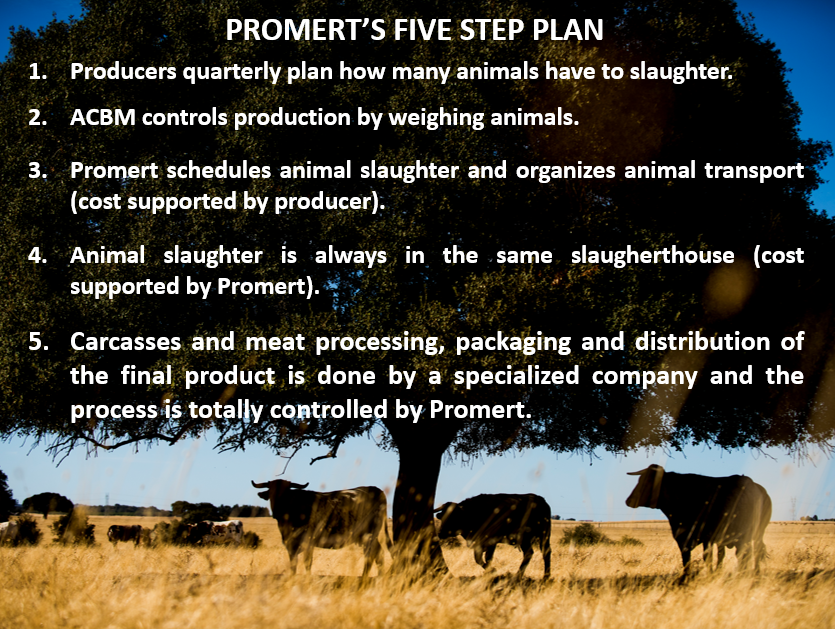 Mertolenga PDO beef is sold in large supermarkets and through the HORECA (hotels, restaurants and catering) channel. In large supermarket areas Mertolenga PDO beef is sold as UMC (Average Purchase Unit). Each UMC has between 8 kg and 10 kg of meat and is made up of different cuts (12 packs) each with 350 grams. Promert also has a small and simple store near its office that sells only frozen meat. 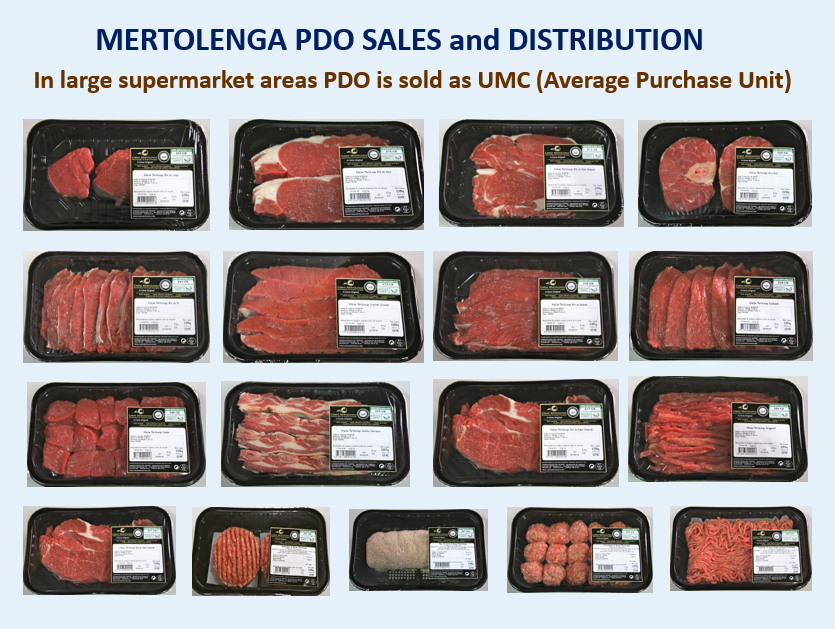 With the existence of a producer organization that supplies the final client without other entities in the middle of the process, Mertolenga beef producers now have a channel to sell their production at a fair value. Another impact registered on the farm's performance is the guarantee of having a regular sales price during the year, which is adjusted when needed and in this way it does not suffer uncertainties occurring in other supply chains. 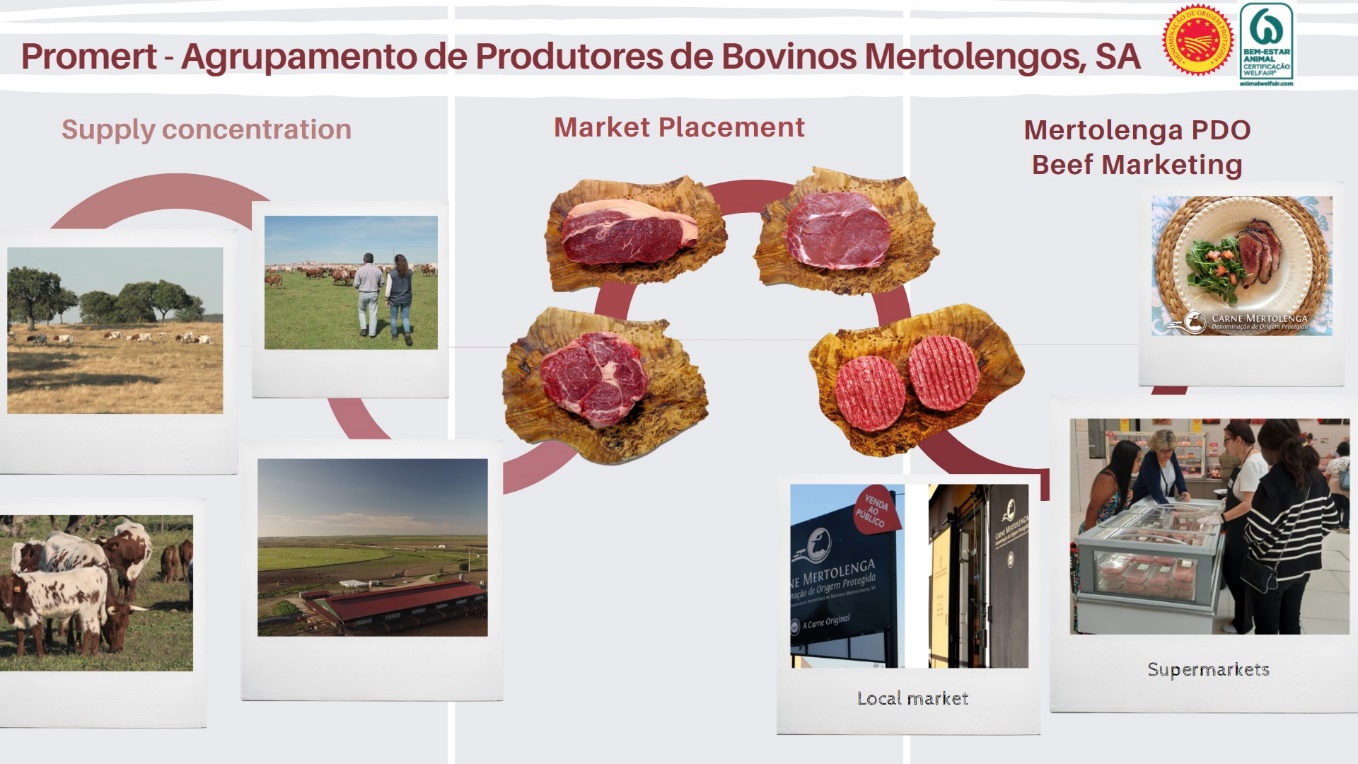 Rui Cardoso, a Mertolenga beef producer, says that selling his production through Promert, besides giving him a fairer reward, allows him to plan his management more effectively and with less risk.