Due to global warming heat stress events in summer which can impair health and welfare of fattening cattle housed indoors are increasing. To assess the use of ceiling fans to reduce heat stress in beef bulls 69 Charolais bulls were observed on days with high THI (Temperature-Humidity-Index). The bulls have been in 12 pens with 5-6 animals each. Only half of the pens were equipped with ceiling fans and the air movement between pens with and without fans was prevented.
Three ceiling fans (Zefiro Line, patented by CMP Impianti S.r.l., Viadana di Calvisano, BR, Italy) were placed above the six pens, each fan was composed of a central impeller and five aluminium blades that created an aerodynamic system 3 m in diameter. Each unit ventilated a surface of 10 m in diameter, and moved an increasing air volume from 42 000 m3/h at THI=60 to 132 000 m3/h at THI=74. Power consumption reported on the technical sheet was 0.3 kW/h.
The ceiling fans were controlled by an automatic switching system placed inside the barn that communicated with sensors placed 2 m above the central pens’ floor. Sensors detected barn temperature and humidity and a computing system calculated THI values by combining these two variables. Consequently, the ceiling fans were switched on (THI ≥ 68) and adjusted according to THI conditions inside the barn. Fan speed ranged from 2.0 to 2.4 m/s at THI=50 and from 6.8 to 7.5 m/s at THI⩾72. Under natural ventilation, air speed at the animals’ level ranged from 0.2 to 1.2 m/s.
Respiration rate, behaviour and cleanliness of the animals have been assessed during four days with elevated THI (Magrin et al. 2017). 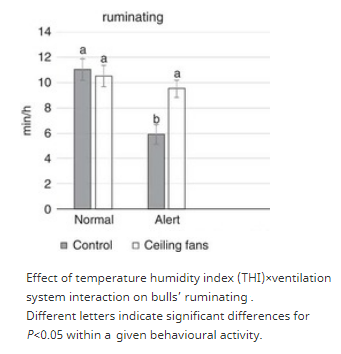 During days with alert THI bulls in pens with ventilation showed less panting and a lower respiration rate than control animals. Furthermore, animals in pens with ceiling fans were cleaner and litter moisture content was lower, the animals spent more time exploring and ruminating. During alert-THI-conditions dry matter intake decreased and the lying time increased in bulls without ceiling fans.
Due to the fact that there have been only very few alert days during the corresponding summer, at the end of the fattening no difference in GROWTH PERFORMANCE between animals with and without mechanical ventilation were recorded by the authors. If the summer had been less mild, which is expected in the future due to global warming, the results of growth performance would most likely have been different.
In any case the animals with the ceiling fans have been CLEANER, the moisture of the litter has been decreased. In the farmer’s opinion the investment should be repaid by cheaper litter management and improved bull cleanliness at the slaughterhouse, whereas the power consumed by the ceiling fans should be offset by savings in straw for bedding.

Some general information about the ventilation of cattle housing can be found on Teagasc website: https://www.teagasc.ie/news--events/daily/beef/the-power-of-fresh-clean-air.php
However, in low, very wide or poorly streamed stables the air builds up, fans can help. Ventilators are used to move air in the barn, which dissolves the insulating air cushion around the animal. This air movement of 1 to over 2 m / s between the animals and around the carcasses results in a cooling effect (wind chill effect) and thus a great thermal relief for the animals.
The height of the house and the electricity requirement must be considered by choosing suitable fans. Axial fans as low-speed fans with around 500 rpm and diameters of 1.20 to 1.50 m are often used in German cattle stalls and represent an economical solution. Depending on their size, such fans achieve an air throughput of 30,000 to 50,000 m³ per hour.
Alternatives to improve the stable climate can be several smaller axial fans with a diameter of 50 to 70 cm and> 1000 rpm connected as a block. High-speed machines with a diameter of 50 cm can achieve 5,000 m³ / hour. To provide the same air output, larger fans have a lower power consumption and are more economical than smaller fans with higher speeds.
For relatively free spaces such as waiting rooms or high stables, vertically flowing ceiling fans can also be used. Depending on the size of up to 6.30 m in diameter, such fans generate air movements of more than 200,000 m³ per hour (Anonymous, 2014 (agrarheute.com)).