On a farm with an average livestock of 40 Charolaise cows and calving season mainly in early spring the calves were born without special attention necessary. The cows are loose-housed in two groups of approximately 20 cows on a straw bedding. During the housing period feeding composed mainly of hay with additional grass silage. The calves are born healthy and without assistance (except for very rare single cases). 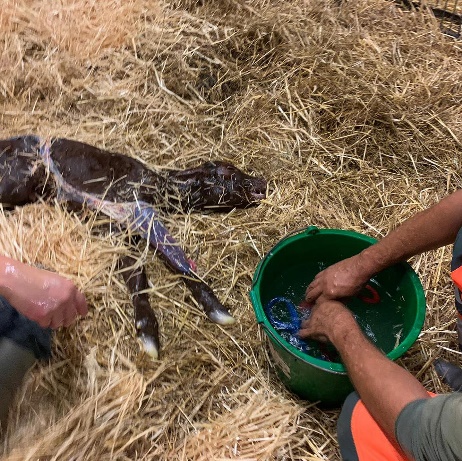 However, after 5-7 days the farmer noticed a drop in calves’ vitality. They were lying down a lot, seemed tired, and had sunken flanks. A sign of not drinking enough milk. When led to the udder, calves tried to drink only hesitantly and just chewed weakly on the teat without real suckling. Approximately half of the calves developed a light respiratory disease with coughing and light nasal discharge. Single cases of light diarrhea were reported.

A clinical examination performed by the veterinarian resulted in a suspicion of lack of Vitamin E and selenium. The collected findings were strong indicators as the symptoms were very typical. In combination with the knowledge of Germany being a deficiency area referring to selenium the probability of a clinical manifested lack was very high. Selenium and Vitamin E are absolutely necessary for the function of a series of enzymes within the immune system (e.g. antioxidative enzymes) and for the correct function of the muscles. Therefore the injection of 5 ml Vitamine E/Selen to every calf on the day of birth was implemented. As a lack of ferrum also is very common in newborn calves and is often associated with a lack of vitality a simultaneous injection of 9 ml ferrum (100 mg/ml) was implemented as well. If a calf showed any of the described symptoms within the first three weeks after birth the injection was repeated. The testing of the sucking reflex was implemented as the definite indicator for the decision if a second injection was necessary. Following this protocol the farmer was able to reduce the number of weak calves and calves with sucking weakness to just a few single cases.

The calves injected with Vitmin E/selenium and ferrum showed a much higher vitality then the calves of the beginning of the calving season when the good practice had not yet been implemented. This resulted in higher milk intake and therefore better weightgain in the first weeks. The calves are healthier and the frequency of the veterinary consultings for weak calves decreased to only single cases.

The good practice was implemented as a verbal agreement between the farmer and the veterinarian but still as a strict rule to perform on every newborn calf. The first five calves were injected under supervision of the veterinarian. As the procedure is easy to perform the farmer then was able to applicate the injections himself. During the calving season, he also developed a good judgement of the calves’ vitality, which was necessary to decide about a second injection. The testing of the sucking reflex proved to be a very good indicator for this decision.

Easy indicators for decision-making and consequent sticking to the plan were the pillars for success!