A good reproduction management is a key issue that directly conditions the farm income. The first step towards the success of the reproductive efficiency is data collection within the farm. Then, it is useful to compare the data with other farms under similar circumstances in order to know the current productive situation of the herd, and to establish realistic targets for improvement in the short, medium and long term.

Advisors demand easily accessible tools to help farmer define consistent reproduction goals and make them aware of the economic impact of a poor reproduction management. Therefore, to know the evolution of the reproduction performance of cattle at a national scale is highly relevant. In France, data is already collected by national databases. In addition, the valuation of the economic references collected within the framework of the INOSYS livestock network system makes it possible to define economic elements for better management of the reproduction at farm level.

That is why REPROSCOPE project (Observatory of the reproduction of cattle in France, 2014-2017, CASDAR convention n° 5348) aimed to develop tools and references adapted to the technical and economic context of farms to support the management of reproduction in dairy and suckler cattle herds. The system was developed in France by the Institut de L´elevage - IDELE together with several stakeholders, and offers now a national reproductive performance observatory which makes it possible to explore breeding performances in more than 190.000 cattle herds.

The tools developed are:

- A national observatory of reproduction results

- A repository of reproduction objectives by breeding system

- A tool to estimate the economic impact of not achieving these objectives.

The whole issue of the REPROSCOPE project is to support all breeders, but also the community (technicians, veterinarians, scientists, education, etc.) likely to intervene in reproduction problems in dairy or suckler cattle herds.

The observatory is based on reproduction data resulting from calving, movement and insemination records from the National Identification Database (Base de Données Nationale d'Identification - BDNI) and the National Genetic Information System (Système National d'Information Génétique - SNIG) from France. From these data, it is produced anonymous statistics updated every year with homogeneous calculation methods in all suckler and dairy farms. The data is processed and analyzed to produce databases developed, compiled, consolidated, stored and returned with a free web interface accessible to everyone: consultancy bodies, advisors, technicians, veterinarians, researchers, farmers, etc. (www.reproscope.fr).

Through Reproscope, it is possible to: 1) position the reproductive performance of the herd based on a reference group formed by similar herds (characteristics of the herd and reproductive management); 2) to visualize the margins of technical progress of the herd; and 3) estimate the economic impact of a change in the herd performance (reducing the interval between calving, reduced age at first calving).

To use the tool, the first step is choosing the population which the farmer/advisor wants to compare:

- the choose can be based in characteristic of the herd such as: geographic area, type of production, breed, specialization, production level and herd size.

- or to choose depending of the reproduction management such as: calving seasons, % of first-calf heifers, % of artificial insemination, % of crossbreeding and age at 1st calving objective.

After selecting a specific population according to animals or herds features, 20 performance indicators describe reproductive results through averages and distributions under a homogeneous and comprehensive way (Figure 1). Furthermore, the observatory can be used to describe reproduction practices; show performances variability; measure differences between areas, breeds, systems, etc. 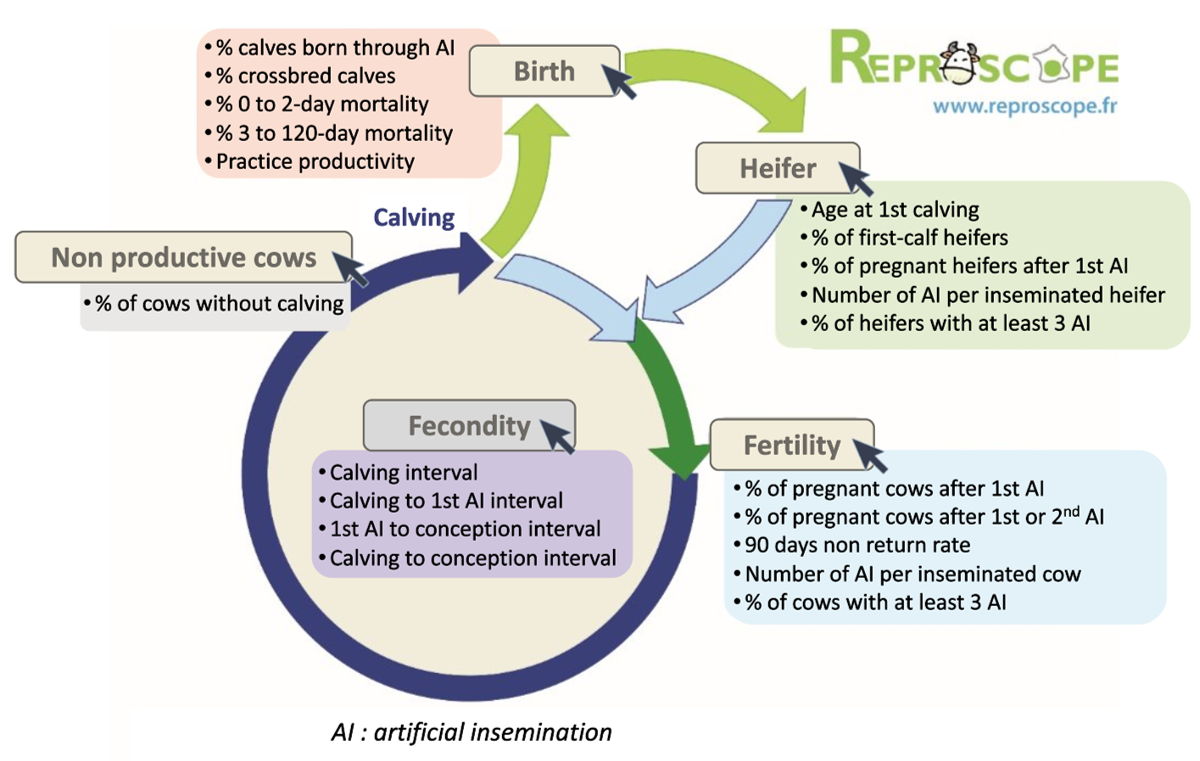 From the positioning tool, farmers and their advisors can locate a herd performance among profiles, in order to facilitate estimation of possible progress margins, and an economic simulation estimates the added value that the farmer can expect.

These profiles, reports and applications are management tools which supply extremely useful data to herd owners, developed in order to optimize the performance of their herds. When used correctly and when management decisions are implemented in line with reports, there is increased on-farm profit as a result.

It is a useful and promising tool that can be implemented in other countries, with the essential objective of the farmer to know the reproductive performance of his farm and set their own goals to improve it. However, as the tool was developed to supporting stakeholders in France, it is only available in French language.

A brief presentation of this innovation was done by Pauline Madrange from IDELE in a meeting organized by BovINE project: