Vitality is an important criterion in newborns. Because vital animals take in colostrum more quickly. The colostrum supply after birth has a strong influence on how healthy and productive a calf becomes.

In developed countries, human pre and post-natal care programs have resulted in a very high rate of success for prevention of problems in newborn babies. Part of this success is due to a standard requirement for the completion of a health and vigor score within minutes of birth. This method of assessment is commonly termed the Apgar score. It has become the standard procedure used for human newborns. In this assessment, five easily observed signs in newborn babies are evaluated. These signs can be assessed without special equipment and taught to delivery room personnel without difficulty. They comprise heart rate, respiratory effort, reflex irritability, muscle tone, and skin color. Tests of newborn vigor have been developed for other species including pig, horse and dog. In each of these studies, a modified Apgar score was created; choosing a few parameters that were easily evaluated without the use of advanced equipment (Murray, C.F. Leslie, K.E., 2013). It has been shown that animals with lower scores are slower to stand (piglets) or had a higher mortality (dogs) (Mee, J.F., 2008).

For calves, there have already been different attempts to develop such a score but so far, no uniform result has been found. Proposed parameters for scoring vitality in new born dairy calves are for example respiration, hair coat appearance, no peripheral edema, mucous membranes, response to reflex stimulation, muscle tone, heart rate, rectal temperature, sternal recumbence, attempts to rise, suckling (Mee, J.F. 2008). . 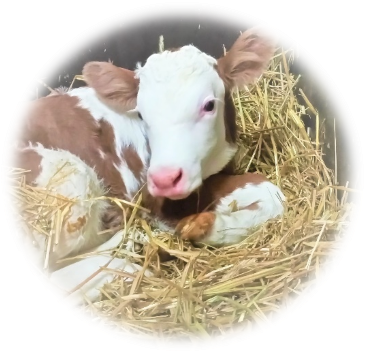 These parameters should be observed especially after difficult birth and caesarean sections. Calves that deviate from these values need help. You should assist with colostrum intake. Maybe the Madigan Squeeze is also interesting here (see Dummy Calves).

Easily observed signs, evaluated without the use of advanced equipment, easy to be taught can save lives!