Costs and benefits of use of linseeds in reducing enteric emissions

The use of fats in the dairy and beef cattle feed ration is among the strategies to reduce enteric methane emissions by decreasing ruminal organic matter fermentation.

The effectiveness of adding lipids to the cattle diet at the aim of reducing CH4 emissions, is influenced by various factors including the source of the fat and the fat acids profile.

Among the various fat sources that can be used, extruded linseeds has been found to be very effective in providing decreases in methane emissions due to its high acid linoleic content which selectively reduces some of the rumen microbes, shifting rumen processes towards lower methane emissions. Unsaturated fatty acids can reduces CH4 emissions up to 15% for intakes of about 5% of the total dry matter in- taken.

The available results on the use of extruded linseeds refer to beef finishing cattle fed with linseeds supplementation from 300 to 650 kg live weight (ARVESTA). Assuming a baseline of 2% dry matter fat content in the diet, to add 3% fat content using linseed implies an average extra cost of 0,27 per animal and day (Source ILVO, 2021). However, the fat supplementation increases the energy density of the feed ration, resulting in a 10% higher daily growth rate and better feed conversion rate (ARVESTA).

For the simulation of the costs and benefits of linseeds only typical beef finishing farms using indoor and confined housing system were considered, because high-fat ingredients are not easily manageable with grazing animals and with animal eating mainly unblended forages.

In the simulation of the costs and benefits of linseeds supplementation an extra cost of 0,27 € per animal and day was taken in account, assuming a 10% increase in daily growth, achieved with the same amount of dry matter of all the other components of the feed ration. Cost per head of medical products and veterinary intervention was assumed to remain the same. 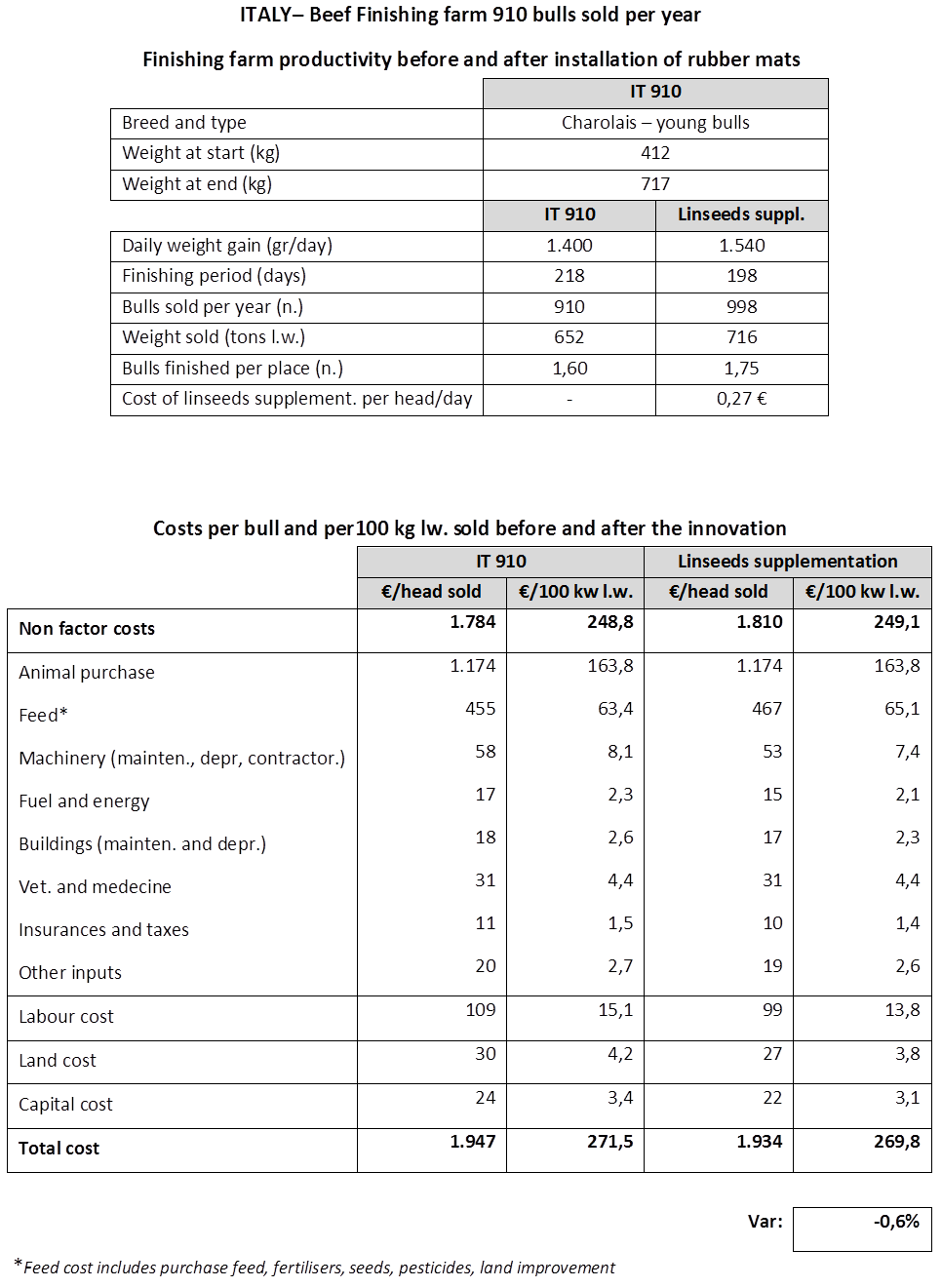 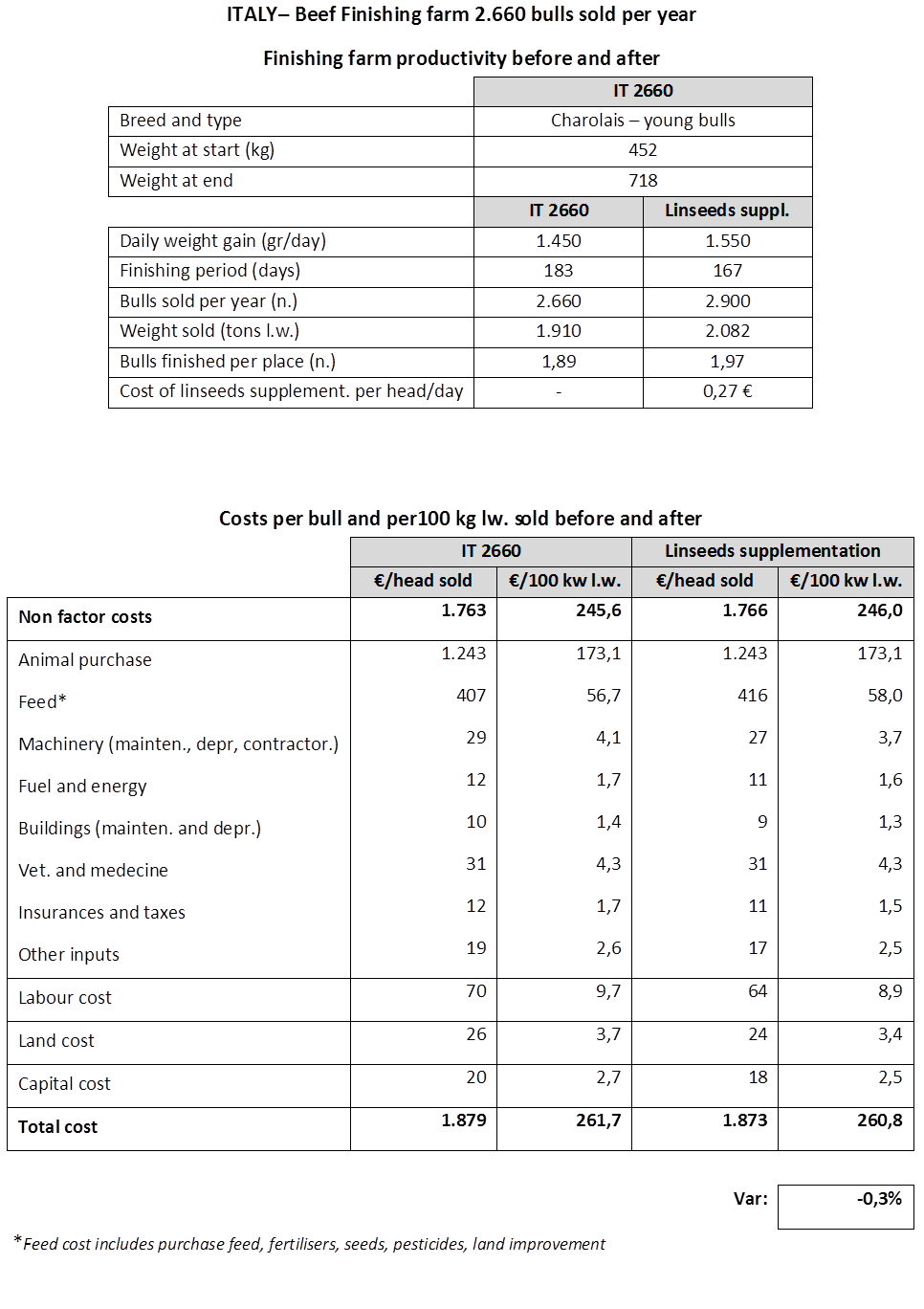 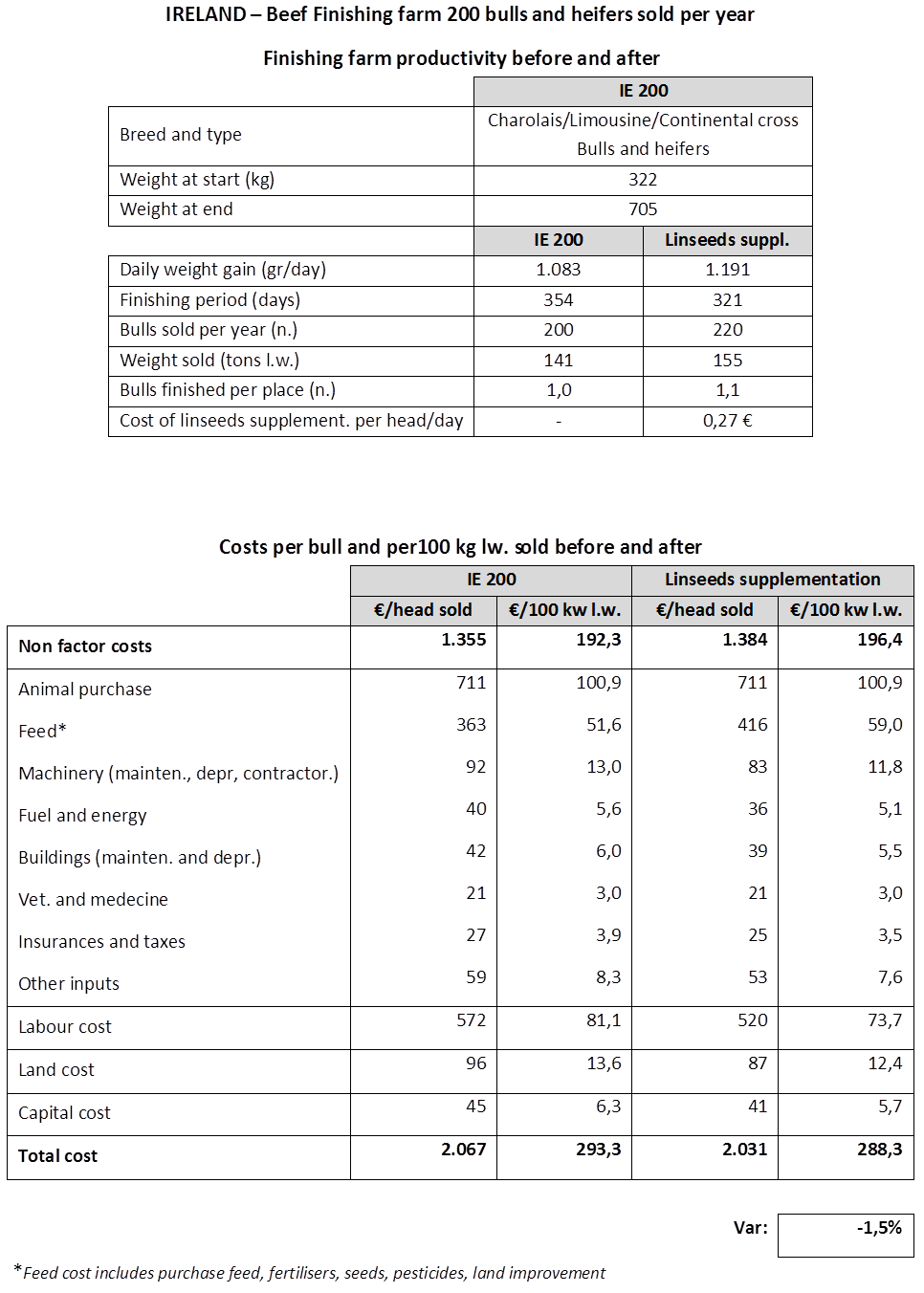 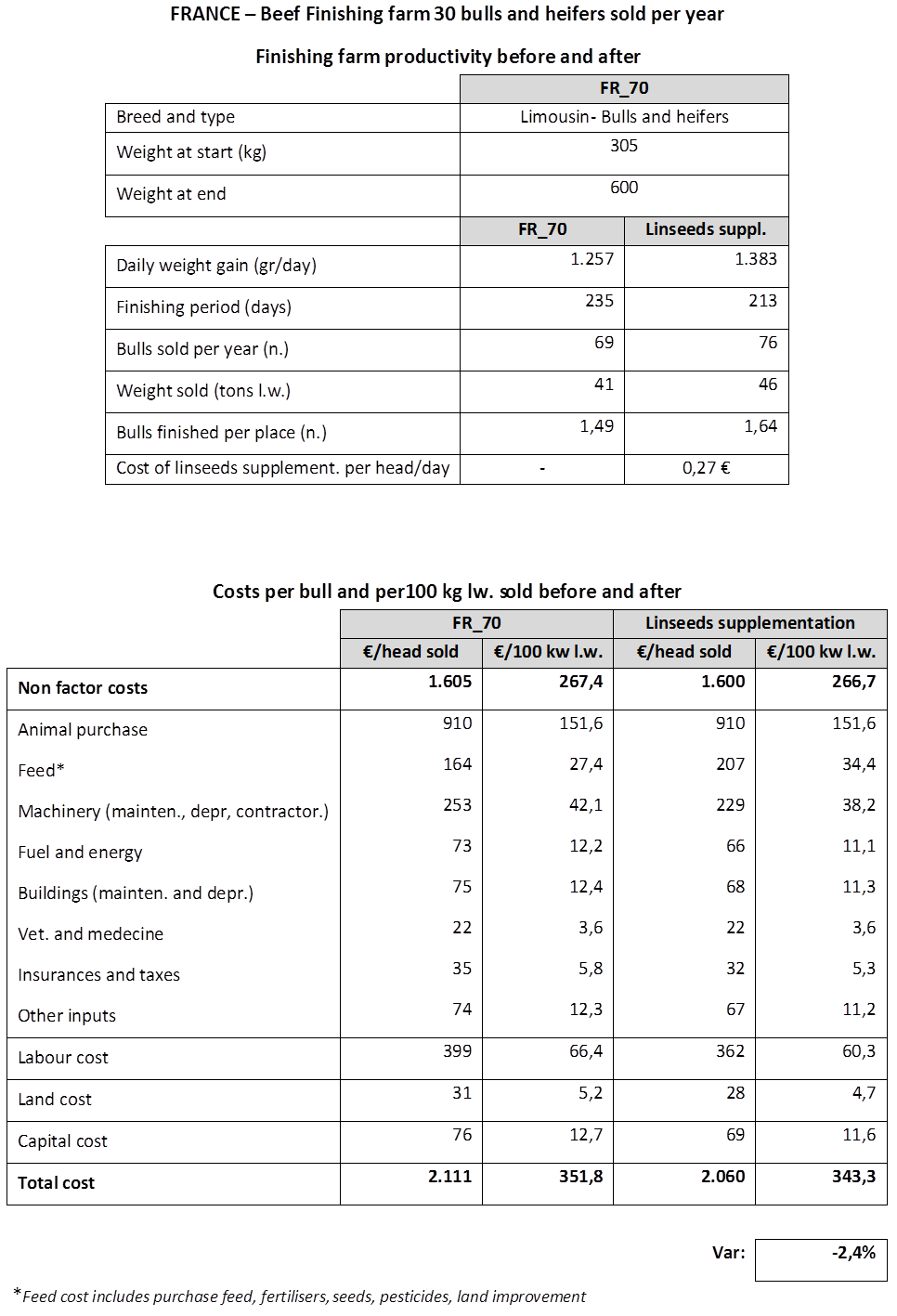 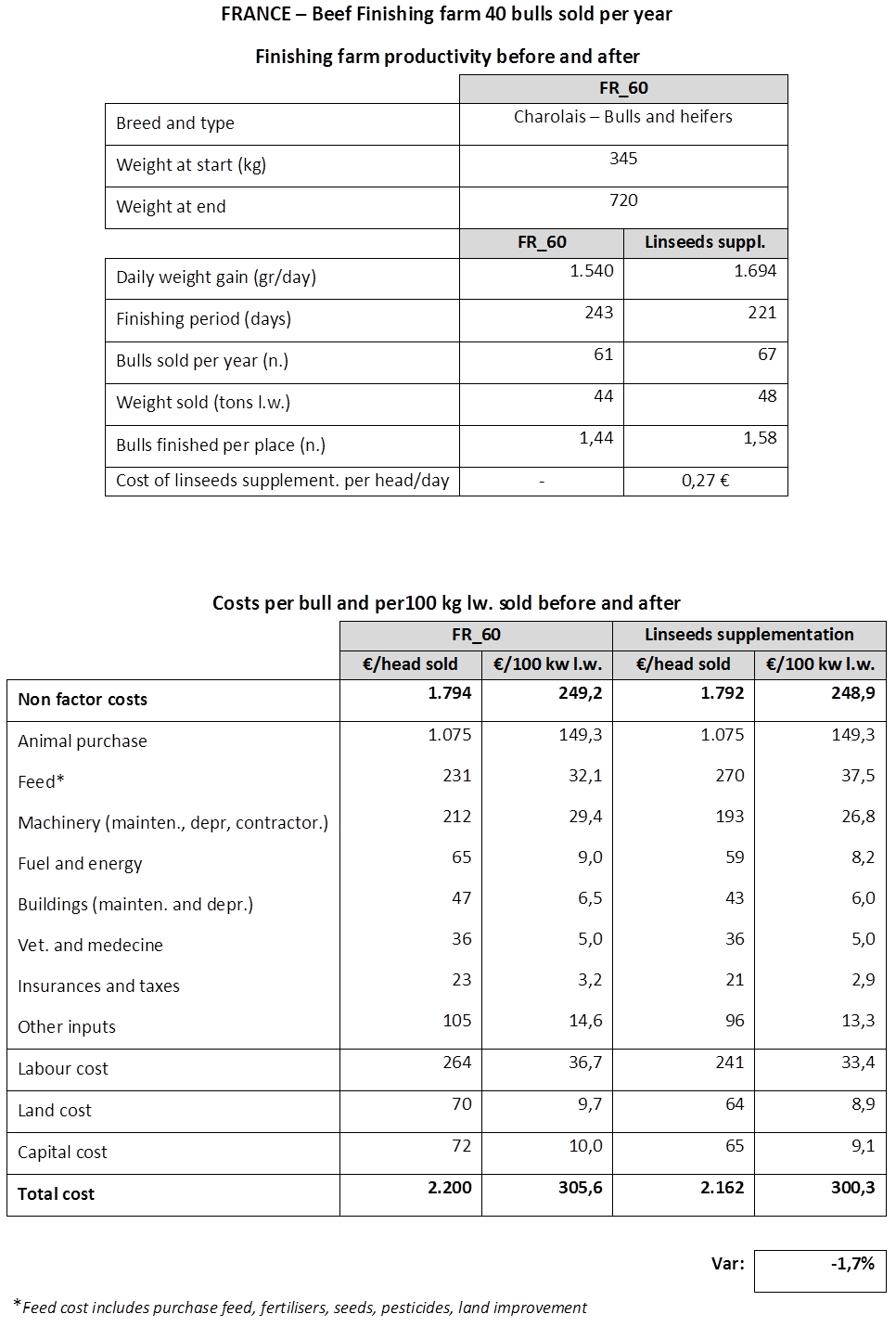 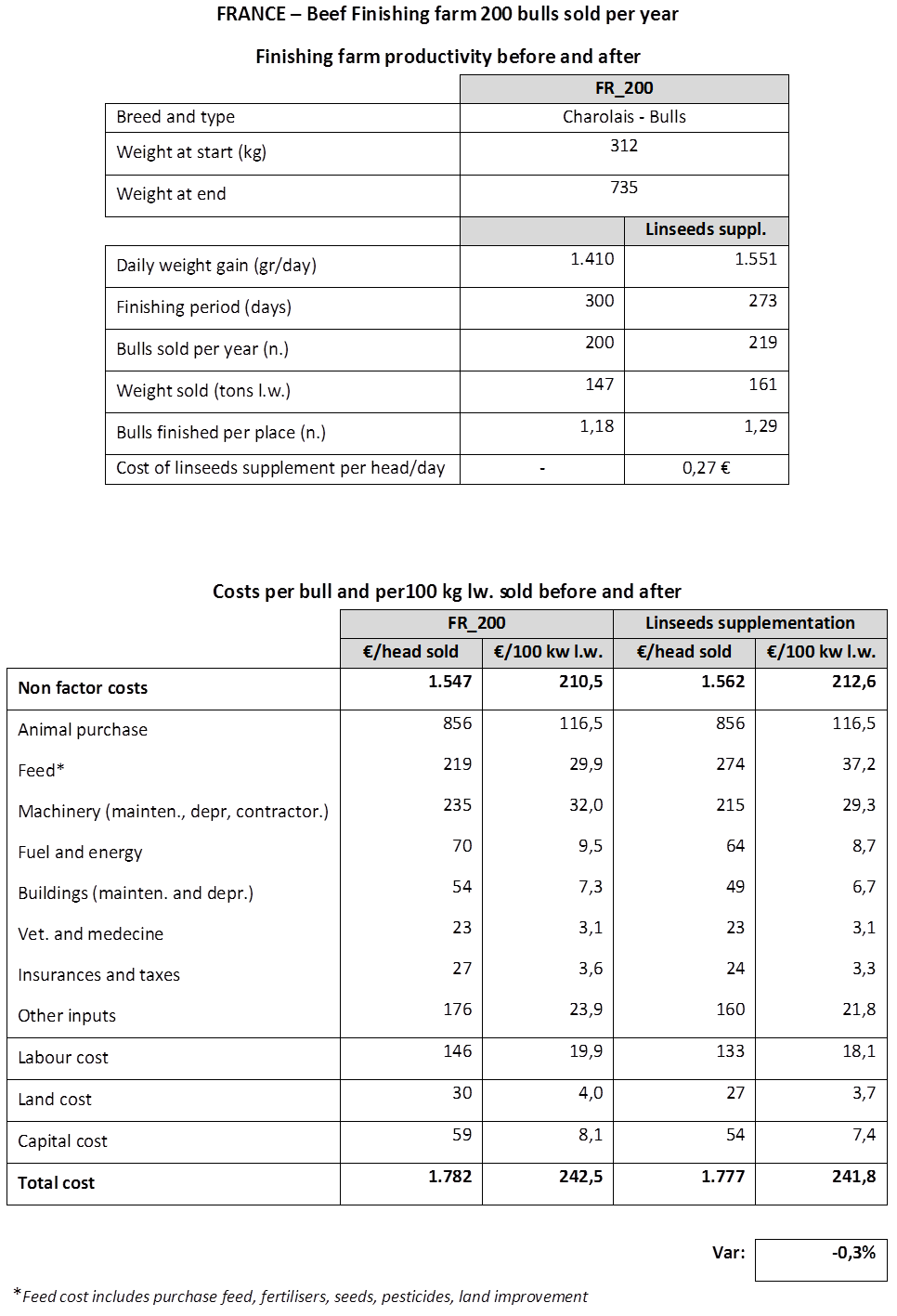 Pellerin S. et al. (2013) How can French agriculture contribute to reducing greenhouse emissions? Abatement potential and cost of ten technical measures. Summary of the study report conducted by INRA on behalf of ADEME, MAAF and MEDDE .