The method consists in combining several utilities of GHG mitigation in the cultivation of fodder plants and permanent grassland. First, simplified soil cultivation is used in various ways depending on the farm and soil type. For example, in light soils, strip till is used, often with direct sowing. Subsoil, chisel are used on heavier soils. The cultivation time and the emission of nitrogenous oxides from soil mineralization processes are reduced. The content of organic matter in the soil increases and carbon dioxide is thus sequestered. No tillage and more organic matter increase water storage, which is of great importance in the long-term drought in most of Poland. Secondly, when calculating the fertilizer dose, the nitrogen concentration in natural fertilizers and the nutritional requirements of plants included in the Polish "Nitrate Program" are taken into account. The program is a legal, obligatory act combined with the EU Nitrates Directive and additionally own regulation in mineral fertilization. As a result, nitrogen fertilization and emissions of nitrogen oxide from soil are reduced. The next step is the soil application of the slurry on arable land by trailing shoes, and on grassland by trailing hose. Their use allows for the reduction of ammonia and nitrogen oxide emissions. In the field of mineral fertilization on arable land, urease and nitrification inhibitors are used, for mitigating ammonia and nitrogen oxides. When using manure, it is quickly mixed with the soil. Finally, on artificial grasslands, at least 10% of clover seeding is introduced - for the pastures of the white clover, for the mowing lands of the red clover. The share of these legumes increases the nutritional value and digestibility of the feeding ration, which reduces nitrogen excretion in natural fertilizers and nitrogen oxide emissions. By binding nitrogen from the air, the clover reduces the amount of nitrogen fertilization and mitigate nitrogen oxides emissions. 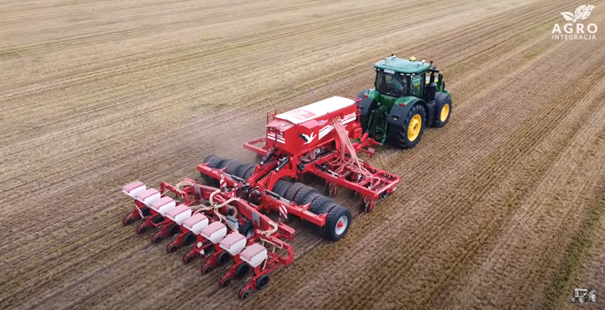 Agriculture in Poland is responsible for 8.0% of the national GHG emission. N2O emission from soils is 44.7% of the total agricultural emission, and cattle enteric fermentation is another 40.3%. Despite a small contribution, agriculture in Poland is perceived as one of the main sectors influencing climate and environment. Even without setting a mitigation goal, farmers must start reducing their environmental impacts for the development of market demand and the improvement of product quality. Taking mitigation measures is also necessary to maintain consumer preferences, especially for the meat market.

Various elements of the integrated method have been implemented in the last 3-5 years through different mechanisms. For example, the obligation to balance nitrogen in fertilizer doses was introduced obligatorily for all large farms in 2017. Still other methods, such as simplified soil tillage, direct fertilization, are gaining ground due to low costs and more convenient lead times.These methods have gained in popularity in recent years as a result of increased production concentration, better knowledge and advice.

The main benefit is the total reduction of GHG emissions from soil cultivation by an average of 20% CO2eq. The dissipation of nitrogen compounds into the environment is also lower. Additional advantages are better organization and management, greater storage of water in the soil and lower unit costs. The main limitation of the implementation is the high investment cost.

The main challenge was to make a change in the awareness of the breeder, consisting in the perception of the activity carried out as a more complex process, stimulated by consumer expectations and the needs of the environment, and then to adopt the model of sustainable development. The bottleneck is always the costs associated with the change in the organization of production, a change in the cultivation method, the way of nutrition, i.e. changing the existing standards into new ones.

The key to success was the knowledge transmission to the farmers and lower operating cost of cultivation in this method.

The good practice can be monitored via the participation of breeders in the organizational structures and financial support systems from ARMA. This guarantees the flow of information on the implemented practices and their effects to the level of national statistics.

- Convincing breeders about the need to take investment risk to obtain measurable benefits.
- Support and advice from institutions and organizations for breeders in knowledge transfer