Accelerometer for calves - Activity as a parameter for health and welfare

Sick calves lie down a lot and drink or eat less than their healthy peers. Therefore, calf activity can be used as a parameter for early detection of calf diseases. Furthermore, play behaviour indicates positive emotions and can thus be used to assess "animal welfare".
The problem here is that behavioural observation can be tedious and labour-intensive. Therefore, such behaviours will rarely find their way into an animal welfare assessment protocol. And they will also be neglected from time to time in the stressful daily routine of the farm. With pedometers, however, a possibility for automation was tested and found.
In comparison with video evaluation, it was shown that the play behaviour of up to 48-hour-old dairy calves can be detected via pedometers (Gladden et al. 2020). In another study it was shown that low activity or increased lying down of calves can be detected by pedometers and used for early detection of respiratory diseases (Duthie et al. 2021). Fröhner, A. et al. (2011) also emphasizes the usefulness of pedometers in health monitoring of calves, but clearly points out that this aid can only support visual animal observation. Because there are considerable differences in activity between animals. 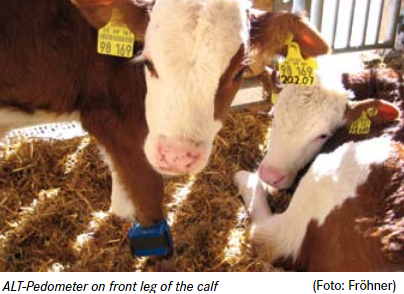 Even if the monitoring with pedometers is not necessarily something for practical use, these findings give an important impetus for animal control. Take the time to observe the behaviour of the calves and detect problems at an early stage!

This Innovation has an impact on: