Bovine respiratory disease (BRD) is one of the biggest problems affecting the health of weaned calves. A combination of a new scoring system and an app developed for this purpose shall help reduce BRD prevalence and improve weaned calf health in large-scale California farms. Similar to the stroke risk score for humans, the tool is designed to be herd-specific to help producers identify the risk of their calves and the management changes needed to control BRD on their farm.

We became aware of this scoring system for assessing BRD in calves while researching Simple labor-saving tools to measure and communicate high animal welfare standards on beef farms. After presenting the scoring system, a demo of the scoring system and app was planned in Germany. The scoring system has already been presented several times in the BovINE project (https://hub.bovine-eu.net/search/on-farm-scoring-for-brd-ca-brd-scoring-system) and is relatively simple. A factsheet on this can be found at the following link: https://www.calvesbreatheeasy.co.uk/downloads/CalfEd-Bulletin-Scoring-and-Early-Detection.pdf

During the demonstration of the system, however, the first disillusionment was that the system (at least in Germany) was not available for Android as promised. However, the application (in English) could be downloaded for Apple devices and was tested on 2 farms with calves. 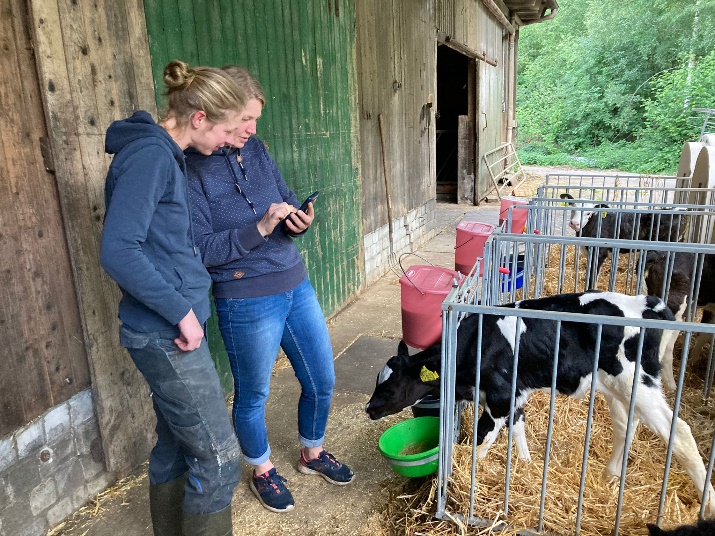 Under the menu item "Scoring", users can enter data, such as the farm name. In addition to the actual BRD scoring, various other data about the calf can be entered (date of birth, breed, sex, etc.). This is followed by the BRD scoring. Step by step, the app now guides the user through the individual parameters of the scoring system for each calf, always showing (highlighted in green, yellow or red) the total score currently applicable to that animal. First points of the scoring are to decide whether eye discharge occurs or nose discharge. The next criterion (drooping ears or crooked head) can already lead to a clear result for this calf (BRD score positive). If this is not the case and the score remains low, information on coughing (absent or spontaneous) and respiration (normal or rapid or difficult) must still be provided. A temperature measurement is only required if the result is not already clear from the other inputs (see also the factsheet with the parameters). If all necessary input is made for a calf, the statement negative or positive is obtained for this calf.

Under the menu item "Prevalence" some basic settings are suggested, which can also be changed. Based on the information about the number of calves present and the assumed prevalence, the size of the random sample is determined. One by one, pen numbers are now given which calf to evaluate, with the first question always being "Calf present?". So if the pen is not occupied, a new one is suggested. In addition, this start page shows how many evaluations have already been entered and how many are still needed. After the given number of calves has been evaluated, it should be possible to generate a report for the prevalence in the herd.

A selection of screenshots of the different functions can be seen in the following poster: https://ucanr.edu/sites/statewideconference2018/files/282685.pdf.