Effects of vitamin A on beef marbling

Vitamin A include compounds (mainly retinoids) possessing biological activity which include critical roles in vision, embryonic development, and in cellular growth, differentiation, and death in all animal species (Blomhoff & Blomhoff, 2006), including beef cattle.  Vitamin A deficiencies in cattle can seriously affect animal health and production efficiency (Bailey, 2017), but this lipid soluble vitamin may also influence marbling, an attribute associated to the eating quality of beef.

Plants vary in the amount and bioavailability of carotenoids, some of which could then be transformed into vitamin A by the animal metabolism. The fresh green forage is usually rich in active precursors but depending in feedstuff source and store conditions it is maybe required a preformed vitamin A supplementation to reach recommended levels (Pickworth et al. 2012). The current Nutrients Requirements of Beef Cattle (NRC, 2016) recommend 2,200 IU vitamin A/kg of dry matter (DM) for feedlot cattle, although, short-term deficiencies can be overcome by reserves accumulated mainly in the liver (Wellman et al., 2020).

It may sound contradictory, but both vitamin A restriction in the fattening stage or supplementation with extra nutritional levels in early life stages were associated with higher marbling scores in beef cattle in some research studies, as will be exemplified below. The mechanisms of action are complex, during the early stage vitamin A enhances adipocyte hyperplasia, and during the fattening period it reduces adipocyte hypertrophy (Peng et al., 2021).

Vitamin A restriction at the finishing phase

More than twenty years ago a first study associated low serum concentration of vitamin A with higher beef marbling scores in Japanese Black breed cattle (Oka et al., 1998). Currently, it is a good practice used in Japan to keep low levels during the middle fattening period to increase marbling and therefore, the value of carcasses (Gotoh et al., 2018).

In a recent study from Brazil, castrated males crossbred (50% Wagyu, 25% Angus, 25% Nellore) were raised under grazing conditions, weaned at 8 months and finished during 320 days in feedlot with one of the two dietary treatments: 1) with supplementation of 99,900 IU of vitamin A/kg mineral mixture (n = 10); or 2) without vitamin A supplementation (n = 10). A lower intramuscular fat content was observed in animals supplemented with vitamin A compared to the non-supplemented, as shown in Figure 1 (Campos et al., 2020).

However, not all always that relationship has been shown, probably due to the difference in the level, time and duration of the restriction, as well as cattle nutrition and genetics (Wang et al., 2016). In United Stated of America, Knutson et al. (2020) observed that the impact of vitamin A restriction on marbling is dependent on the breed’s propensity for intramuscular fat deposition. They assessed dietary vitamin A on meat quality of 32 Angus cross (75% Angus × 25% Simmental) and 32 purebred Simmental steers in the finishing phase (approximately 170 days, until they reach an average of 610 kg of body weight). The treatments were low vitamin A (723 IU/kg DM) and control (2,923 IU/kg DM). Angus cross steers feed with low vitamin A had 16% greater marbling score than control diet, but the effect was not detected in purebred Simmental (Figure 2). 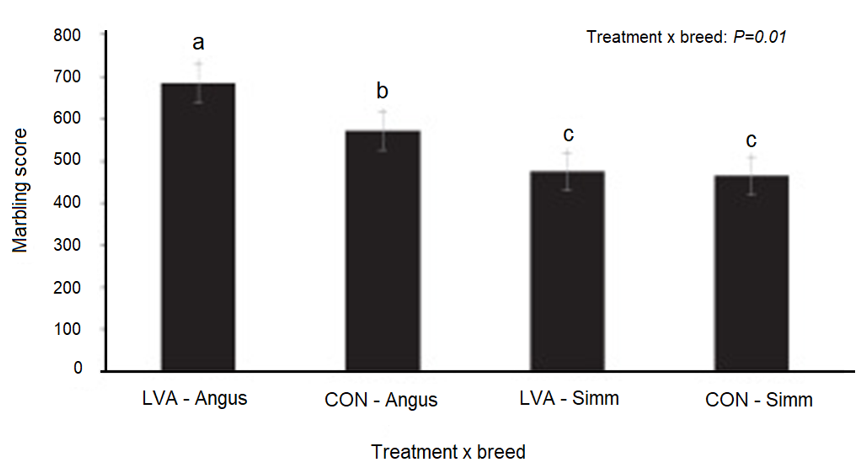 Figure 2. Marbling score of the longissimus muscle in Angus and Simmental steers fed a finishing diet with low vitamin A or control diet (Knutson et al., 2020).

Vitamin A administration  at neonatal stages

As the formation of new fat cells (adipogenesis) is more active during the neonatal stage, vitamin A administration during this phase would enhance intramuscular adipogenesis and marbling (Peng et al., 2021; Wellmann et al., 2020; Harris et al., 2018). In a research study carried out in Washington State University Ensminger Beef Center (Harris et al., 2018), the injection of 150,000 IU of vitamin A to Angus steers calves at both birth and one month of age increased in 25% (4.93 vs. 3.95) the intramuscular fat at 308 days of age (measured in vivo by ultrasound), and in 15% the marbling score (USDA) at harvest. Another investigation performed in Korea (Peng et al., 2020), demonstrated that oral supplementation of vitamin A in the early growth period, from day 5 until weaning at two-months of age, can promote marbling development in Hanwoo calves.

However, all the results presented in this post are from research conducted in regions outside Europe. Further studies are necessary to test feasibility under European contexts, where animal genetics, feedstuffs, age/weight at slaughter, and further factors can differ. If implemented successfully, these innovations could be helpful to promote the beef quality in European beef cattle, as the marbling levels are considered as one of the vital factors influencing beef sensory quality including tenderness, juiciness, flavour and colour.