Animals that feel fear of humans can be stressed and thus decrease their health and productivity. The suckler beef cattle is usually kept in extensive outdoor grazing systems with low management input and limited human contact. In addition, the routine husbandry practices, such as ear tagging, dehorning, castrating, and medical treatments, probably cause aversive responses by the animals to humans.

In Switzerland, a test was performed to investigate the effect of gentle touching applied during the early life of suckler beef calves on avoidance distance on-farm and stress reactions at the abattoir. Limousin crossbred calves received a gentle touching using the TTouch© method, starting on the second day post-partum and finishing at one month of age. The method is based on light movements of fingers and hands by shifting the skin in a circular manner. These special forms of touches are defined in velocity, direction of movements and intensity of contact. The test sessions were conducted between 9 and 11 am. Depending on the season, half of the tests were conducted in the barn and the other half on pasture. All animals were slaughtered at 10 months of age.

Gently touching treatment improved animal responses to human–animal interactions on-farm and at the abattoir and reduced the stress associated reactions vs control animals. These effects were assessed by avoidance distance tests and by measuring physiological stress using indicative blood hormones and metabolites levels. Instrumental meat quality analyses were also conducted and a reduction in shear force of the cooked meat was found and the cortisol level of the touched animals was lower.

However, cattle are often finished at farms other than those from where they born, where positive gentle handling is rarely applied in early life. Due this, another study tested the TTouch© method applied during the last 5 weeks before slaughter. In this assay, several regions on the animals’ head and neck were treated consecutively in this sequence: cheek, bridge of the nose, dewlap, ears and the forehead, the base of the skull, and the neck, as shown in the figure below. 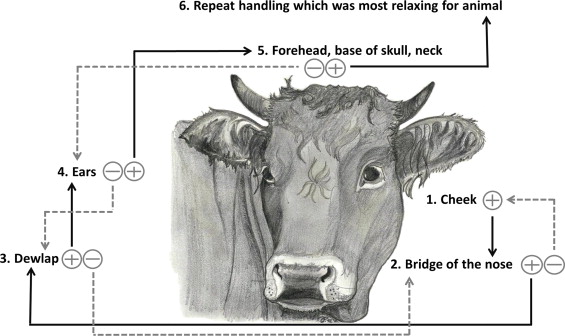 In both research studies, the treatment animals were less fearful towards humans and showed less stress-related behaviour at the abattoir. Fewer stress-related reactions at the abattoir can be the reason for improved tenderness in TTouch©-treated suckler beef calves in early life (Probst et al. 2012).

Usefulness for the farmer

The additional workload could be compensated by having less fearful animals more easily to handle, and by the improved meat quality, where an economic benefit might be obtained, especially via label programs.