Heifer management take an important place in the cow-calf system farm. The reduction of the age at first calving at around 24 months would increase the number of calves per cow, reduce feed (and other) costs and improve the benefits in the farm. At this first calving, dystocia problems are more frequently found, so heifers should breed to easy calving sires and is recommended to be aware of potential problems at birth. After calving, primiparous cows tend to increase their post-partum anoestrus period and therefore, it is endorsed to initiate breeding in heifers early (to avoid late-calving cows in the future).

Together with other important factors that should be considered in the heifer management (such as good nutrition, good genetic value of animals adapted to the farm conditions, good handling, health, etc.), the use of fixed-time artificial insemination can help to increase productivity. Added to the advantages of the artificial insemination (AI), such as facilitation on the use of genetically superior or easy to calving bulls, the reduction in the number of bulls needed in the farm (or no bulls required); one main advantage of using fixed-time AI is that animals can be bred on an appointed convenient day with a consequent calving scheduled earlier to multiparous cows, to be aware of dystocia problems or based on feed availability. By using the synchronization protocols there is no requirement for estrus detection since a bull can be used to breed females returning to heat after the first fixed-time AI. Furthermore, the use of protocols could induce heat in anoestrus females (Diskin, 2016). A more uniform line of calves is another important benefit.

As showed in the figure 1, in a 42-44 day breeding season, synchronizing the herd can result in an extra oestrus cycle for the breeding females, where around 50% of females could conceive on the first day of the breeding program and improving the total pregnancy rate (ABS global). 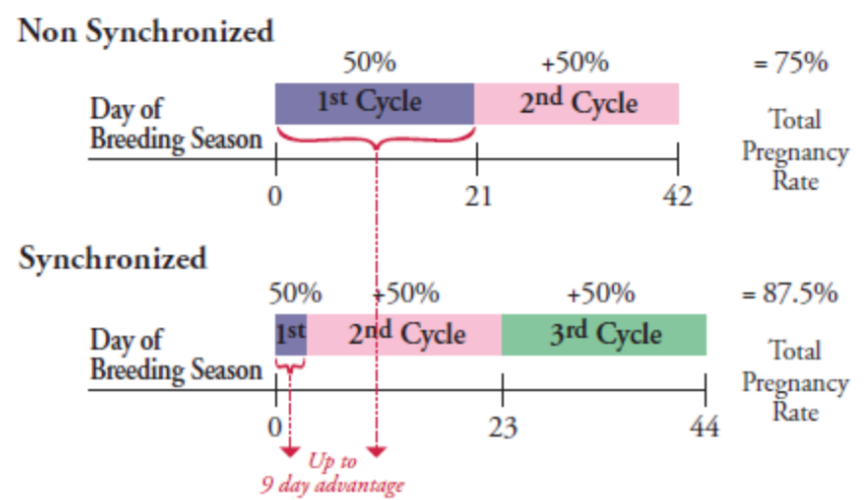 However, ovulation synchronization protocols in heifers are less commonly used maybe explained by a general believe that they become pregnant easily without intervention (Silva et al. 2015). Actually, heat in heifers is not a general concern. Furthermore, initial protocols worked better in cows compared to heifers, but some improvements were developed and some examples will be presented later in this post.

Widely used ovarian synchronization protocols are Ovsynch, based on the use of GnRH (Gonadotrophin-releasing hormone) combined with prostaglandin F2α (PGF2α), or a variation of that protocol, such as the CO-Synch, where the 2nddose of GnRH is administered at the same time as the AI is performed, both protocols illustrated in Figure 2. 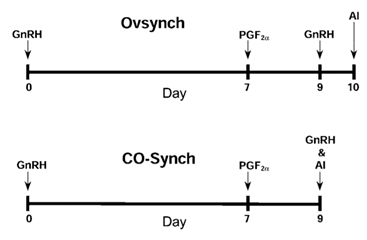 Ovsynch and CO-Synch protocols showed variable results in dairy and beef heifers so they are not recommended, therefore, modifications were proposed to improve pregnancy rates or reduce handling, costs (Sanz et al., 2019), such as:

One study, for example, has shown in heifers from dairy cattle, that a protocol D (d: -6, GnRH and a progesterone insert; d: -1, PGF2α and insert removal; d: 0, PGF2α; d: 2, GnRH + AI) reached a similar pregnancies per AI compared to heifers inseminated after detected estrus, but it reduced days to first AI, increased total pregnancy rate and finally resulted more cost-effective (Silva et al. 2015). Another study conducted in Spain with beef heifers, has shown around 50% fertility at 1st insemination and 89% cumulative fertility in three months with a protocol described in the figure 3 (Sanz, 2017). 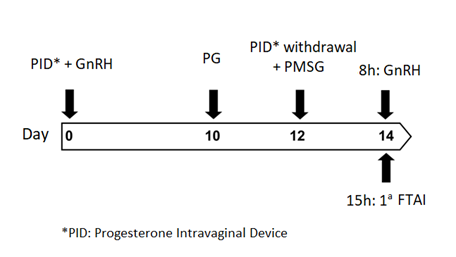 Has to be taken into account that protocols should be adapted to animal type and farm conditions and that is why the farmers should seek advice from a specialist, who can recommend the most appropriate protocols. Some products are not allowed in some countries (such as estradiol, which is not permitted in Europe) and they have to be handled properly. Some protocols that include progesterone can return acyclic females into cyclic, increasing pregnancy rate, but abortions could happen later and negative consequences may arise. Some more recommendations are exposed following:

Some commercially available Prostaglandin, GnRH and eCG products used for oestrus cycle control in cattle are shown in table 1 (Diskin, 2016).

Further advantages of synchronization, description of protocols for cow and heifers and costs related are mentioned in the video below, produced by researcher David Kenny from Teagasc: