On a farm with an average livestock of 30 Simmental cows and calving season from January till May. The cows are housed tethered during the calving season. During this time, the feeding is composed mainly of hay and grass silage. In summer, the cows are grazing accompanied by the stud bull. The calves are born healthy and without assistance (except for very rare single cases). After 2-5 days the calves suffered from severe diarrhea. Approximately two third of the calves had to be treated with infusion to treat dehydration, acidosis and loss of electrolytes, some of them had to be treated repeatedly. Still not every calf survived the disease. 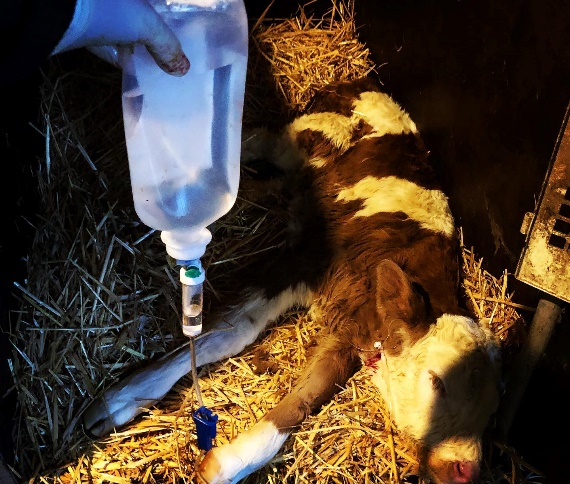 The faeces of three newly ill calves were tested in a quick-testing system, which showed positive results for either rotavirus or corona virus or both. Due to the test results, the following good practice was implemented: The stud bull joined the herd in May. After three months, the cows were checked for pregnancy. If the result was positive, they stayed within the herd. If the result was negative, the cow was separated from the herd into a new formed group. These cows were tested again six weeks later to pay tribute to the possibility of an early non-detectable pregnancy at the first check. If the result then was positive, they joined the old herd again. If still negative, it was for the farmer to decide if the cow stayed in the separate group until slaughter or joined the original herd again to try to get pregnant. If the cow rejoined the original herd, the veterinarian checked for pregnancy regularly.

All cows with a positive result in the first check-up were vaccinated against Rota- and Coronavirus in the mid of December. It is vital that the vaccination is applied three weeks to three months before calving. Thus, a sufficient concentration of specific antibodies against the viruses is reached in the colostrum. The calves need to drink as much colostrum as possible, as soon as possible after birth, to gain a sufficient passive immunity. Therefore, it was implemented that the farmer checked for newborn calves at least every 4 hours. Following this good practice, the farmer was able to reduce cases of diarrhea caused by Rota- or Coronavirus to near zero.
It was discussed with the farmer; if the pregnancy check-up, the timing of the vaccination and the colostrum management seemed possible to him. After he agreed to these points, the plan was written down and followed strictly. The results could be seen immediately in the first calves born in January without developing diarrhea. Main bottleneck for this good practice were the timing of pregnancy check-ups, timing of vaccination and guaranteeing of colostrum feeding after birth.