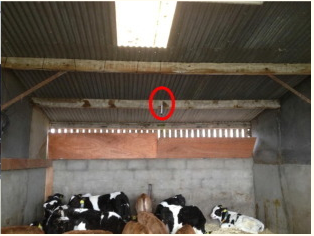 The pircture shows the microphone hanging above the animals. The microphone has been encircled in red for spotting easier in the figure. (Vandermeulen, J. et al. 2016)

The cough monitor can be used as an early warning system for respiratory diseases in calves in order to be able to mitigate their course and consequences through earlier treatment. The greatest success was that coughing sounds are actually recognized and their accumulation can be linked to the occurrence of respiratory diseases. This is an important point, because respiratory diseases are a major reason for impaired health and welfare as so as for mortality during the rearing phase in beef suckler farms.
This system is still a research project, but the automatic recording and algorithm-based filtering of sounds already works in other areas of animal husbandry, so there is little in the way of the system's possible introduction into practice.