Even if the feed ration for suckler cows should be cost-effective and less labor-intensive - it has a decisive influence on the welfare of cow and calf and there is often a need for optimization! For this, the Obsalim method could be a possibility. Obsalim is derived from the French "Observations alimentaires", which can be translated as "feeding observations". In short, it means observing animal characteristics to better manage feeding!

French veterinarian Bruno Giboudeau began developing this method in the 1990s. As a veterinarian trained in homeopathy, he puts a lot of emphasis on cow behavior and body traits when making a diagnosis. On the other hand, he has done a lot of ration calculations for different cow herds. In doing so, he discovered interesting correlations, which he would like to make accessible to animal owners with the help of the Obsalim method. The use of the cards (which are also available as an app) trains the eye for the animals, they are a simple tool that can be used daily by any person. 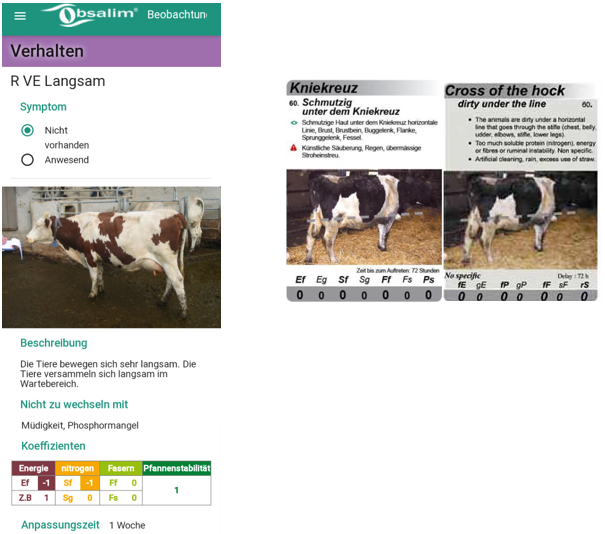 Left side: Screenshot from the German version of the Obsalim® app: Described symptom is a slow herd, there is an indication of an energy deficit (Ef -1), a slightly negative protein supply (Sf -1, Sg 0), the result for the structure (Ff & Fs) in the ration is 0, for the rumen stability (Ps) 1.

Right side: Examples for Obsaklim® cards in German and English, shown is a part of the “cross of the hock”

About the procedure: To perform Obsalim, all animals of a herd are observed, it is looked for symptoms that all animals (at least 2/3 of the herd) show. Relevant Symptoms are described on the set of cards (61 cards or an app) and are from the areas of skin, hair, urine, feces, udder, hooves, nose, eyes, withers, pHG zone. Not every symptom has a specific meaning, it is the combination of symptoms that leads to a diagnosis. Therefore, at least symptoms from three areas that apply to the entire herd should be used to make a conclusion.
Once you have selected some cards, there is a table at the bottom of each card (or on the screen of the smartphone) with values for fermentable energy (fE), global energy (gE), fermentable protein (fP), global protein (gP), fermentable fibres (fF), structural fibres (sF) and rumen stability (rS). By adding up these numbers, the feed ration can be inferred from the symptoms on the animal. This now gives a picture for the energy, protein and fibre supply of the animals as well as the rumen stability. If, for example, the sum of all selected cards in the fE column is negative, there is an energy deficit in the ration. The ration can then be adjusted if desired and necessary.

A big advantage of the method is that you get a result in a short time and can act quickly. Obsalim reflects the daily situation of the herd, whereas the milk performance test tries to analyze the past and the forage analysis tries to look into the future. Obsalim can be used for cattle, but also for goats and sheep. For each species there is a separate set of cards, a computer program and an app. Obsalim is a simple tool to sharpen your eye for animal welfare.