Training in the S-EUROP classification system in Navarre

It is difficult to define the concept of carcass quality in a way that satisfies all stakeholders involved in the procurement and marketing of the carcass, since their interests are different.

One of the basic premises for the proper functioning of a chain involving buyers and sellers is transparency. It is a question of offering a homogeneous product, in its basic characteristics, on which a price is established. In order to clarify the market and facilitate commercial transactions, it is necessary that the products offered appear classified, according to quality levels, in categories or classes according to a valuation based on homogeneous criteria according to what the consumer is willing to pay.

The evaluation of the carcasses is carried out with an economic objective, and focuses on the characteristics that have the greatest impact on their value. For a classification scheme to be effective, it is necessary to have a common language for all members of the production, marketing and consumption chain. A good classification scheme allows developing different categories with different price according to their quality.

The classification of the channels, according to Colomer-Rocher (1976), is the action of distributing or grouping without prejudice of any kind, a heterogeneous set of carcasses in homogeneous subsets called classes of analogous characteristics, constant in space and time.

Over the years a series of procedures have been developed, subjective or objective, aimed at grouping the carcasses into different classes, in order to provide homogeneous categories, initially in terms of regional composition (commercial parts and muscle packs) and tissue (percentage of bone, muscle and fat), to later incorporate aspects such as color, marbling, tenderness, etc.

One of the first procedures proposed for the categorization of the carcasses was to group them according to weight, age and sex of the animal, objective variables that are easy to obtain but have various drawbacks with respect to current commercial objectives.

In order to improve the results offered by the previous classification system, they added a series of measures, diameters and perimeters of the channel.

Also, and since the first attempts to classify the carcasses, various proposals have been proposed, such as subjective characteristics (conformation and degree of carcass greasing, fat and meat color) which appear constantly as criteria used in the classification of carcasses. Recently the entry into force of Regulation (EC) No 1234/2007 establishing a single organization of agricultural markets has made it necessary to adapt the carcass classifications of the different species.

The conformation of the channels is assessed by visual appreciation of the profiles of the different anatomical regions and comparison with photographic patterns (which are assigned a score on the S-EUROP classification scale). The scale laid down in Regulation (EC) No 1234/2007 is defined as the development of the carcass profiles, and in particular of the essential parts  (hip, back and shoulder).

Since the adoption of Regulation (EC) No 1234/2007 and every five years (duration of validity of licenses), INTIA organizes a conference to qualify the workers of the slaughterhouses and personnel of the IGP Ternera de Navarra in the SEUROP classification system. The conference is given by Mr Rufino J.Gil Guerra, national expert and Spanish representative of the MAGRAMA in the EU Beef and Sheep Classification Committee, and lasts 10 hours; half of the time consist of a practical sorting exercise at the slaughterhouse of beef carcasses chosen for that purpose. Each participant must pass a test consisting of classifying a minimum of 40 beef carcasses. The first part of the course includes the legal aspects and fundamentals of the classification system, good practices of fishing according to the authorized presentations and the theoretical description of the system.

In Spain it is the system implemented in all establishments. There are other systems approved in the EU, but they are not being applied in our country.

The Carcass Classification System is the basic tool for standardization and transparency of beef transactions in the single European market.

The carcass classification system provides information on the colour and grease coating of the carcass.

Apart of what is the system of classification of the carcasses, there is another control that is carried out in slaughterhouse and that has a lot to do with the quality of the meat: the measurement of the pH at 24 hours of slaughter. 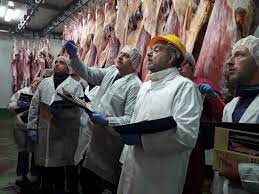 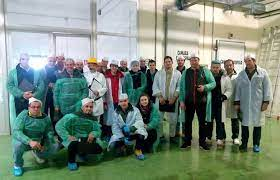 "Ternera de anvarra" IGP technicians say that it is very interesting to conduct training with slaughterhouse staff to compare opinions and arrive at a uniformity of criteria when classifying.

Among the disadvantages they see is that there is a subjective contribution at the time of the valuation of the person in charge of the valuation and that the different types of bovine carcasses in Europe are not equally represented.