The employees of slaughterhouses form a heterogeneous group of people with different levels of expertise in handling slaughter animals. In addition, there are language barriers, which can make training in animal welfare issues difficult. A study on the status quo of animal welfare training at cattle and pig abattoirs was conducted in German-speaking countries. Information were collected by means of an online survey as part of the joint research project “eSchulTS2” (BMEL funding code: 2817806A18).

From the responses, several points emerge that need to be considered when creating training programs for slaughterhouse personnel. For example, 17 respondents stated that 10-100% of the employees would not understand the German language sufficiently. This means that training organized purely in the local language would not be effective.

So far, training is mainly offered once a year completely by the slaughterhouses or in combination with external providers. The native languages of the persons to be trained are not considered in all slaughterhouses; in some cases, training is conducted entirely in German. 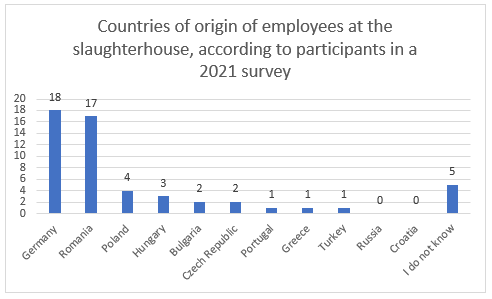 In addition to the language barrier, the content is also rated only mediocre, especially in small slaughter operations. For the training documents or the training courses, a simple and fact-based presentation of the training topics is desired. The clarity should be increased by good photo and video materials. In addition, there should be appropriate training for the different types of anesthesia.

It crystallizes that there is a desire for standardized training materials. A large part of the respondents could imagine that a Germany-wide standardized, up-to-date and non-commercial online training would have advantages over the respective currently used own animal welfare training concept. However, an almost equal proportion of respondents suggested that implementation as a purely online format might be difficult for all individuals and work areas.

Examples for training in slaughter: