The cattle’s weight is subject to considerable fluctuation during the fattening phase, and a failure to adequately track this data may lead to sub-optimal productivity. The automatic recording of individual animals’ weight is a good opportunity to monitor performance, adjust feed requirements, uncover any problems that may be affecting some animals (injury, pathology, etc.), and avoid overweight. With the data generated, the best animals on the farm can be identified. In automated systems, weight data can be collected without animal stress and in real time. 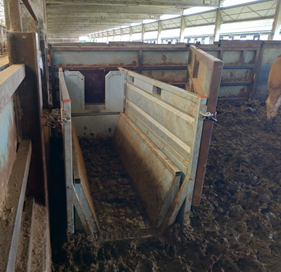 That is why the Società Agricola Annonese in Italy introduced a water trough with an integrated weighing system. The Ritchie Beef Monitor (Ritchie Agricultural, Scotland) collects individual data from their French breed animals during the whole fattening period. The system was placed in a pen with approximately 20 animals, but the equipment supports up to 45 animals and has a capacity of 60 litres of water. When an animal drinks water it is identified and its weight is recorded. Radio Frequency Identification (RFID) ear tags were used for identification. Average live weights are measured every time the animals drink water, which can happen several times per day. Furthermore, the scales can be located at a crossing point which animals walk over.

This equipment has been in operation since the spring of 2020, and the farm which adopted the technology is collecting and analysing data to learn more about drinking behaviour: water consumption, drinking time, the number of visits to troughs, etc. There are plans in the near future to buy and install another scale in order to compare various aspects between pens, such as different feeding plans, the origin of animals, and genetic types.

The main benefits detected for this technology were as follows:

The main challenges in the implementation process were as follows:

A farm demonstration was carried out in 2021 in the Società Agricola Annonese and a video was made by the farmer with the summary of the visits, the characteristics of the farm and the scale and some results from the system. The video can be watched below:

Further demonstrations related to automated weight were carried out within the BovINE consortium in Spain, Ireland, Belgium and Poland.