The innovation discussed is the result from a H2020 project finalized in March 2021 (ShareBeef) and now commercialized by a Spanish company: Digitanimal S.L. The system was implemented in fattening farms of the COVAP cooperative (Cooperativa Ganadera del Valle de los Pedroches) and other farms.

The event was held the 21st of September 2021 at a livestock farmers' fair (FIGAN) in Zaragoza (Spain) and organized by the Universidad de Zaragoza. The researcher covered the following items related to the innovation: 1) Problems to solve; 2) Proposed innovation (comparison with other commercial devices); 3) Benefits for the farmer, 4) Limitations for implementation; 4) Economic viability; and 5) Final recommendations. Attendants had the opportunity to ask questions and clear their doubts about the innovation and their opinions were collected in a written survey.

The presentation was recorded and can be seen below (in Spanish):

Description of the innovation

A scale is placed in front of the drinking trough and when the calf enters to drink, it is identified with an electronic ear tag and its weight data is recorded (see figure below). The first test was carried out in a fattening farm from the COVAP cooperative and today it has three of these weighing systems and plans to install more (one per barn). 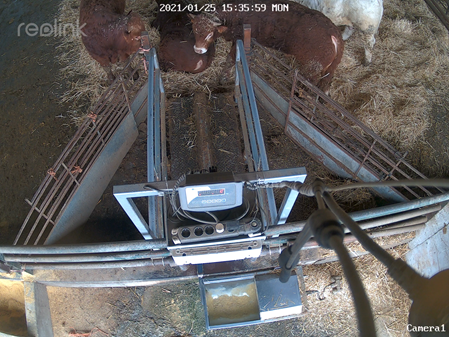 Benefits and limitations for implementation

Many beneficial aspects of the system were highlighted by the researcher and recognised by attendees, such as the derived advantages for visualizing real time individual weight and daily gain. In this way, the slaughter time of each animal can be planned to be the economically optimal, adding value to the calf sold. Many animals can be monitored with a single device and it is possible to customize the system according to specific requirements.

Every time the calf goes to the drinking trough, it is recorded the time it went to drink, how long the drinking lasted, who went to drink before or after, etc. This information can be used to detect events of interest such as health problems, e.g. an animal with a health problem may stop drinking water, or dominance problems, with calves dominants hindering others the access to the water trough.

Answering a question about the minimum period necessary to have a reliable data, F. Maroto said that with four days it is possible to have a very reasonable estimate of the animal's weight. But to get an estimate of the average daily gain, it is necessary at least 10 - 12 days. Maroto also pointed out that the adaptation of the animals to the system was very fast in the trial, occurring within the first day of testing.

The initial investment to purchase the equipment was the main concern identified by attendees and F. Maroto said that a rental option could help to reduce a high initial investment for the technology. Other limitations could be the need for adaptation to facilities and management. Farmers unfamiliar with the use of these data may require training and it is probably difficult the implementation when the farms runs 100% extensively.

Economic viability of the system

The cost-benefit for implementing the weighing scale can be variable, but a simulation of the economic benefits was proposed:

BKH - Automatic individual weighing of animals (as frequently as they visit the water trough): https://hub.bovine-eu.net/animal-monitor-tools-in-fattening-units/automatic-individual-weighing-of-animals-as-frequently-as-they-visit-the-water-trough

Further demonstrations related to automated weight were carried out within the BovINE consortium in Italy, Ireland, Belgium and Poland.