Demonstration: The evolution of the genetic improvement of the Pirenaica breed - New possibilities

An expert in animal breeding and genetics, professor Luis Varona from Universidad de Zaragoza (Spain), with the support of a vet student, analysed data from 1980 until 2020 from a local Spanish breed: Pirenaica, to visualize its genetic progress and the correlations between traits. The data was facilitated by the farmer association CONASPI (Confederación Nacional de Asociaciones de Ganado Pirenaico).

A discussion group, including beef farmers and researchers was organized the 21st of September 2021 at a livestock farmers' fair (FIGAN) in Zaragoza (Spain), in order to show the result of such analyses and to think in new possibilities for the future of the breeding management:

The presentation was attended by 32 participants. Among them, about 10 were beef farmers and the rest were advisors, technicians, researchers and students, all with activities related to beef production. The presentation was recorded and can be seen below (in Spanish):

A reduction of the interval to first calving by 80 days and a reduction of 10 days for the calving interval was observed in the period analysed. According to L. Varona it is possible to be more efficient by selecting for reproductive traits and more progress can be achieved.  The farmers representative (Patxi Aranguren from CONASPI) said that farmers look not to have calving problems, as the management is becoming more extensive, with less dedication and fewer resources. A farmer in the discussion agreed in the progress made in the breed regarding easy calving, which is valuable for him and was an issue in the past.

According to L. Varona many traits, such as carcass weight, conformation and fattening, showed an exponential increase in the genetic progress when the information available from the SIMOGAN-SITRAN traceability systems (2002-2003) started to be used. Aranguren said that before, only data obtained with difficulties and high cost by using scales in each farm, but later free information from slaughterhouses were also available and used for genetic analyses. 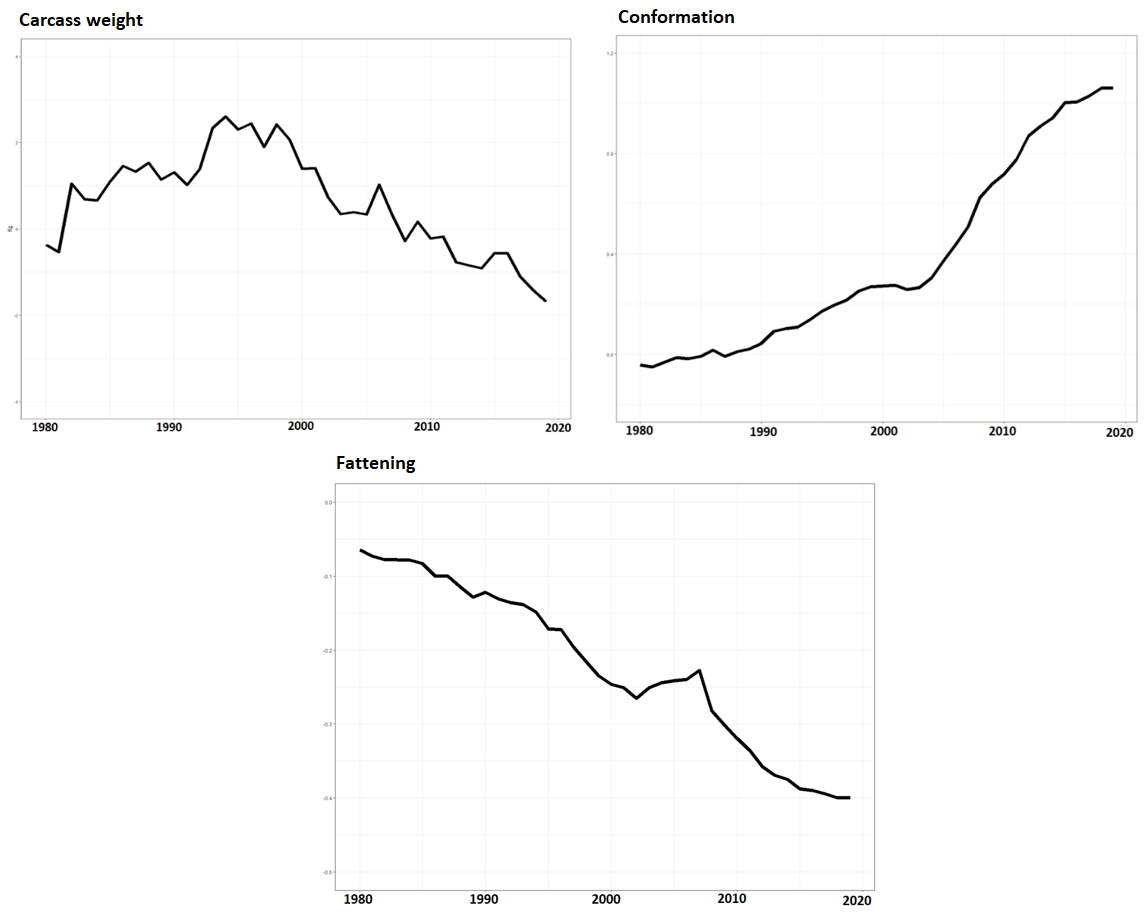 In the period analysed, the conformation of the carcass of the Pirenaica breed was improved, but the fat cover was reduced. A researcher questioned why the reduction in fatness was seeing as negative, since fatness is not necessarily related to meat quality. L. Varona stress that he sees negative the reduction in fatness because it can be negatively correlated with reproductive traits.  He said that after analysing all this data is necessary to rethink again about the best strategy to follow.

According to P. Aranguren, the changes in carcass quality fulfilled the market requirement, which demanded smaller carcasses, with good conformation with led to less fatness (they are negatively correlated). The meat maybe has a better quality when more intramuscular fat has, but the consumer when buy prefer lean meat.  An attendee farmer said that for him a better conformation and less fatness is not his goal, since he has a butchery as well, and he prefers in the future a selection related to eating quality attributes according consumer acceptability, such as tenderness. He said that carcass/meat with more fat are a competition for Pirenaica, according his opinion.

The pH and meat colour traits were also evaluated, as the data is gathered by a slaughterhouse. However, the heritability for meat pH is close to 0 (h2 = 0.03), and therefore, it can be improved by other non-genetic factors. The heritability of meat colour is a bit higher, but still low (h2 = 0.11), and it showed a low correlation with other traits, and therefore, the relevance for including it as a selection criteria was questioned.

New possibilities in the Pirenaica breed

To improve meat quality in Pirenaica meat, data related to intramuscular fat or tenderness is needed, which is no sufficient nowadays. Other option according to L. Varona, would be the development of in vivo predictors of meat quality. But sampling, recording and managing data is of high cost. The association is looking in the future for easy ways of gathering data, such us with the use of automatic tools.

Correlations between morphological characters and other traits were also shown. The leg and udder conformation are the traits considered as good candidates for future inclusion for selection, because they are good predictors of longevity.

About genomics, at the moment only 828 animals were genotyped (with 60002 markers), and L. Varona stressed that for genomic selection to be efficient, many more genotyped animals are needed, an issue that limits the process, because the price to genotype an animal is between 40 to 60 euros. However, the cost probably will be reduced over time.

In general terms, although some progress was made, more can be done. One problem was that not all farmers see the value of the genetic selection based on data and many select by “eye”, but thanks to the hard work and years of showing results to farmers, many of them use the data nowadays. The breed under analysis is a small population divided into many communities in the Pyrenees region, the farms are usually small and extensively managed, and each farmer has their own particular objectives and ways of working.

BKH - Use of carcass and meat quality data in the genetic improvement scheme of the Pirenaica breed: https://hub.bovine-eu.net/data-to-improve-performance/use-of-carcass-and-meat-quality-data-in-the-genetic-improvement-scheme-of-the-pirenaica-breed

BovINE news -  BovINE participation in a congress in Spain: https://www.bovine-eu.net/bovine-participation-in-a-congress-in-spain-presentation-of-the-project-and-a-poster-with-data-from-a-demo/