In Ireland, beef coming from dairy cattle has increased in recent years due to the growth in dairy production and the progress in reproductive performance, so more beef males have been crossed with Holstein females. Usually, dairy farmers select beef bulls based on easy calving and short gestation, but since the dairy–beef index (DBI) was launched in 2019, they have been able to select bulls with these aptitudes and to not lose – or even to improve – relevant features for beef finishers, such as carcass weight, carcass conformation, and feed intake, thereby making their calves more saleable. Beef finishers would be rewarded by the higher efficiency of the animals and the higher carcass value, which increases the efficiency of the whole system. This innovation is related to the four themes from BovINE, but particularly to Production Efficiency and Meat Quality.

To visualise the benefits for dairy farmers and dairy/beef finishers, the table shows the technical and economic performance of the progeny from the top five beef bulls ranked on the DBI active bull list compared to the progeny from the five most common beef bulls used in Irish dairy herds between 2015 and 2018. The top five DBI beef bulls were easier calved on cows (1 percentage point), but not in heifers where calving difficulty was 1 percentage point higher; the calves’ price increased by €18 compared to the five most used beef bulls. The five most common beef bulls, on the other hand, had one day shorter gestation. Taking all these consequences into account, the dairy farmer would have an overall profit of €9.67 per calf produced with the top five DBI bulls. For the beef traits, the top five DBI beef bulls generated progeny that produced carcasses that were heavier by 17 kg and had a superior SEUROP conformation score, which would generate an additional €104.54 to the finisher. 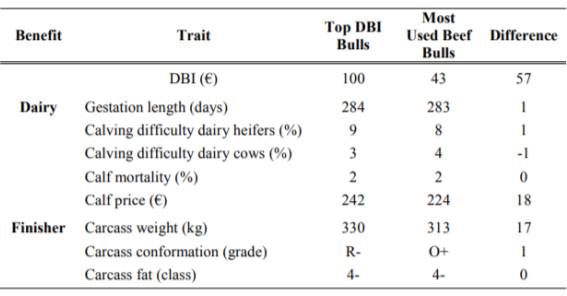 The relative emphasis included in the dairy–beef index (Feb. 2020) can be seeing in the following figure, showing a 49 per cent for calving traits (calving difficulty, gestation length, and calf mortality) and 51 per cent for beef traits (carcass weight, feed intake, carcass conformation, and docility). 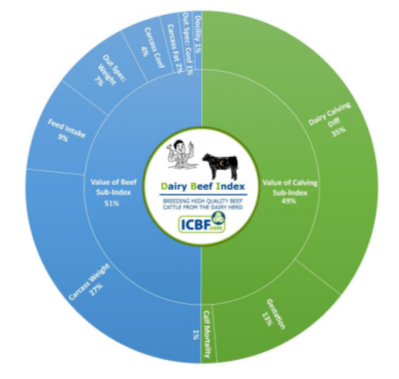 The research underpinning the component traits and the construction of the dairy–beef index was partially funded by the VistaMilk SFI Centre and GREENBREED ,and was a result of collaboration between Teagasc and the Irish Cattle Beef Federation (ICBF) over six months. The incorporation of key nonlinear relationships for calving difficulty was essential to the establishment of the DBI (dairy farmers will tolerate only a relatively low incidence of calving difficulty, irrespective of offsetting attributes). For both carcass weight and conformation, reflecting the very low carcass returns in Ireland from poorly conformed animals with light carcasses was associated with some combinations of dairy and beef breeds. Further research is ongoing to include further traits in the future and to use DNA technology to improve the accuracy. As with other indexes, there is a constant review of the economic values of the traits included. All data is managed at the national level.

This innovation could be applied in other countries, recommending sufficient accuracy of predicting genetic merit for calving difficulty so that dairy farmers are confident in using the index.

In the following video is shown the interview to the ICBF geneticist Siobhan Ring by AgriLand, explaining the DBI index (April 2019)