The amount of meat produced for a given animal varies significantly across de world based on the production systems. However, the lean meat yield (LMY) is the driver of profitability for beef farmers, processors and retailers, and an important trait to meat industry. The LMY is the percentage of edible meat recovered from the carcass and is measured by the weight of lean meat tissue (excluding bone and fat), divided by the total weight of the carcass. Although it can be estimated with SEUROP classification, automated carcass yields would be very useful.

Technologies such as the three-dimensional (3D) depth camera technology, dual energy X-Ray absorptiometry (DEXA), near Infrared spectroscopy (NIRS), visual/video image analysis (VIA) and computer vision system (CVS) has been evaluated for the prediction of LMY in beef carcasses.  The data obtained could be used for genetic improvement and to pay farmers for the real value of the product, encouraging them to produce more efficiently. Furthermore, methodologies that can be used in the slaughter line could replace more laborious methods, such as dissection.

Estimates with these technologies should be more accurate than those obtained with free or readily available information, such as carcass weight, sex, breed, etc.; and of course, to observe whether the predictions are improved by the inclusion of such information in the equations (Sañudo et al., 2018).

The RGBD (red green blue and depth) cameras is a digital imaging technique where depth information is combined to the RGB digital image, the result is a RGBD image, which provides colour and shape of an object. Recent studies have shown the potential of using this technology for the estimation of carcass features before and after slaughter, achieving promising results (Alempijevic et al., 2021; Miller et al., 2019).

A recent study presented a proof-of-concept approach for estimating the LMY of beef carcasses from the 3D information provided by RGBD cameras, is shown in the Figure 1 (Alempijevic et al., 2021). 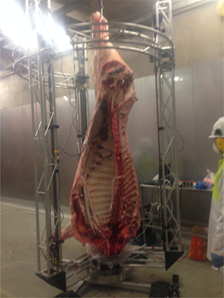 Figure 1. A beef carcass side being scanned by the custom-built rig (Alempijevic et al., 2021).The approach was evaluated from 119 carcasses at two different commercial abattoirs in Australia. During scanning, the Achilles tendon suspended carcass side, is manually moved along the rail into the centre of the rig. This process would be automated in a commercial-ready product. The cameras move vertically as the base rotates 180o through discrete positions, acquiring a set of vertical strips of imagery which cover the carcass side from all angles other than from directly above and below (Figure 2). The 180orotation allows the carcass side to continue along the rail after scanning. After that, the shape of a 3D carcass is reconstructed (Figure 3). 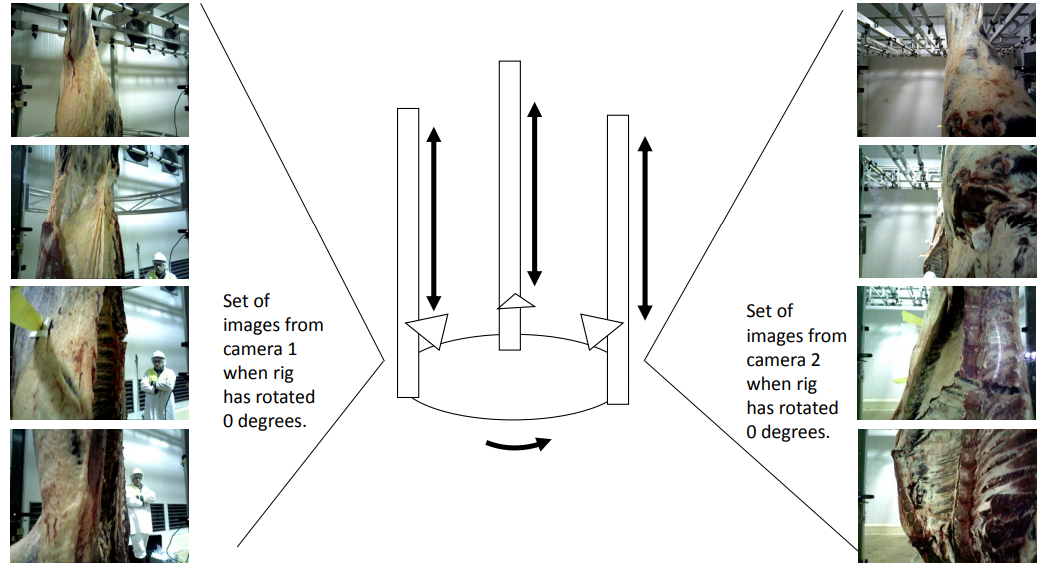 Figure 2. Example of RGB images captured by the RGB-D cameras during the scanning of a beef carcass side. The arrows show the possible motion of the three cameras and the rotation around the base (Alempijevic et al., 2021). 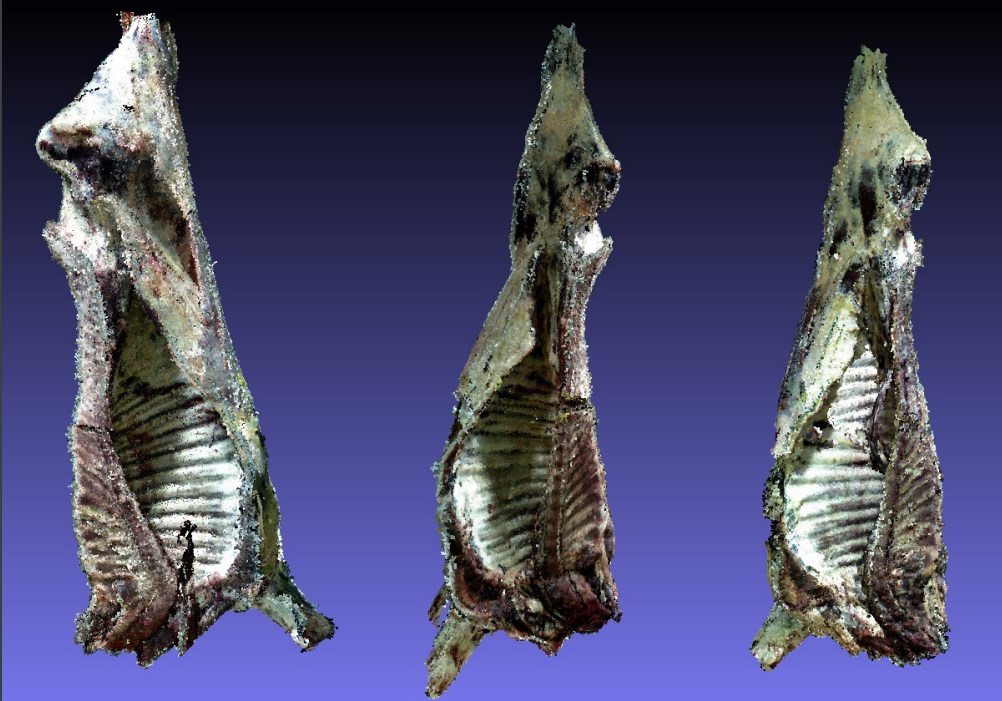 Results from this preliminary study indicate that 3D imaging of beef carcasses is a viable, cost-effective and relatively accurate technology to estimate LMY. However, the authors concluded that more data covering the full range of LMY and further comparisons with other technologies is needed to demonstrate the full capability of the technology described.

The amount of meat produced for a given animal varies significantly across de world based on the production systems. However, LMY is the driver of profitability for beef farmers, processors and retailers, and an important trait to meat industry. Currently, the European beef carcass classification scheme is based on the conformation, fat cover and commercial type, and the LMY is not a mandatory evaluation to be done in European slaughterhouses. If implemented the 3D technology to estimate the LMY in European abattoirs, the resulting data flow would integrate seamlessly into the existing European system.