Bovine respiratory disease (BRD) is the most common cause of morbidity and mortality in feedlot cattle; furthermore, various studies point to the negative effects of BRD on daily gain and carcass weight.

Several systems have already been developed to detect BRD, and the newly developed California (CA) Bovine Respiratory Disease (BRD) Scoring System is also designed to help in the detection of BRD. The CA BRD scoring system was developed at the UC Davis School of Veterinary Medicine for weaned dairy calves based on a comparative case-control study. Clinical signs were recorded in all calves and BRD case status was determined by thoracic auscultation and ultrasound examinations, which were evaluated in parallel. The aim was to develop an on-farm scoring system for BRD that is accurate, fast, reliable and simple. The scoring system developed is based on the presence or absence of six clinical signs, each of which is assigned a model-based score. 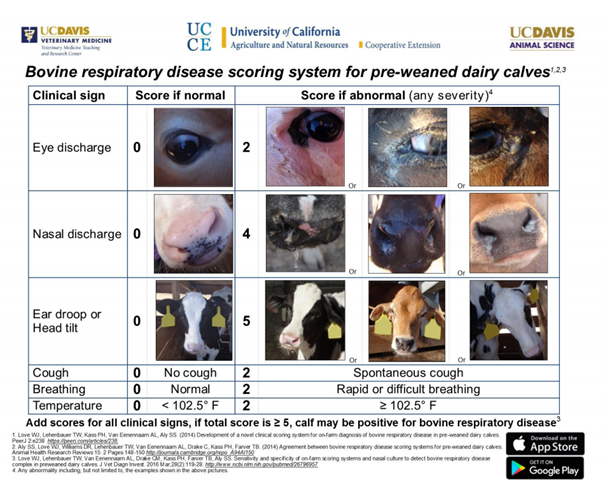 The CA-BRD scoring system is advantageous for use on farms because of its simple design and the decrease in calf handling, compared to other scores. It can help to provide sensible medical intervention in BRD cases and reduce unnecessary treatment of animals with antimicrobials. Furthermore, the agreement with an already known and more detailed scoring system was very good. A good summary is on this factsheet: https://www.calvesbreatheeasy.co.uk/downloads/CalfEd-Bulletin-Scoring-and-Early-Detection.pdf