The ability to produce one calf per cow per year is a key driver of profitability on suckler beef farms. In order for this to occur reproductive efficiency must be optimised. The success will depend on the fertility and health of both, the male and the female. Across the world, the vast majority of beef cows are managed under extensive conditions and mating by natural service. In such situations, and particularly when a single bull mating is used in a herd of cows, the fertility of the bull is substantial.

Subfertility maybe caused by low libido, sperm quality/quantity defects or morpho-physical issues affecting bull mobility or mating ability. Frequently, sub-fertile bulls become apparent in the breeding season or even later, when cows are checked for pregnancy. Furthermore, some undesirable traits could be transferred to the progeny.

To avoid such problems, a standardized veterinarian tool to test bulls prior to use or sale, a bull breeding soundness evaluation (BBSE) method was developed in USA by the Society for Theriogenology (SFT) in 1983. Each country usually adopts its own assessment system based in BBSE, such the Western Canadian Association of Bovine Practitioners (WCABP), the Australian Cattle Veterinarians (ACV), South African Veterinary Association (SAVA) and the British Cattle Veterinary Association (BCVA). Other countries, still need to develop their own system based on their local breeds, productions systems and other circumstances.

In this post it is summarized a guide written by Colin Penny and published by Teagasc, Ireland (Examination of Bulls for Breeding Soundness: An Illustrated Guide) based on the BCVA Bull Pre-Breeding Examination (PBE) Certificate.

The assessment, conducted by veterinary surgeons, indicates whether a bull has met a set of standards for key fertility components which indicate whether a bull has a high probability of being fertile. Since bulls fertility status can change, the evaluation should be conducted on every bull before each breeding season to allow enough time for replacement the unsatisfactory bulls.

The British Cattle Veterinary Association (BCVA) Bull Pre-Breeding Examination (PBE) certificate include: i) physical evaluation, ii) semen examination, iii) mating ability (not generally performed), and iv) classification: suitable or unsuitable for breeding. A brief history should be previously taken to ensure there has been no recent illness, lameness or veterinary treatment that could influence semen quality.

The aim is to identify any physical abnormalities that could compromise the bull’s fertility, the ability to mate or give rise to heritable defects in its progeny. The body condition is an essential factor, 3 being the ideal score on a five-point scale (1= very thin - 5= obese). In the general clinical examination, the heart and lungs should be auscultated to ensure absence of any abnormalities, eyes inspected to secure a good vision and the incisor/dental pad should be checked for a correct alignment.  Identification of problems with the musculoskeletal system (e.g. feet or legs) such as the presence of lameness or conformation defects that can lead to the development of lameness in the future are critical. Examples of some musculoskeletal problems are post–legged conformation (a), sickle hock (b), valgus deformity of forelimbs (c), swollen hocks (d), or corkscrew claw and interdigital fibroma (e).

Scrotum and contents should be also examined to detect abnormalities. A measure of the scrotal circumference (SC) is linked with paired testis weight, and therefore, with total sperm production and semen quality. It is critical that bulls expected to sire large breeding groups (eg 40-50 cows) in restricted mating periods have adequate scrotal circumference. Bulls with above average scrotal circuference reach puberty earlier, a trait that can be passed to female offspring. Bulls with below target scrotal circumference as yearlings will still have small testicles by 2 years old, so culling decisions can be made when they are young.

The British Cattle Veterinary Association decided that the standards for minimum scrotal circumference should be based on the Society for Theriogenology (SFT) minimum guidelines (see table), or where breed standards are published, these can be used. Many bulls of Bos taurus breeds should achieve these measures, however, as there is significant breed variation in age at puberty and scrotal circumference, certain breeds such as Belgian/British Blue, Limousin and Blonde d’Aquitaine would have a proportion of bulls that failed to reach these minimum standards by age.

The measurement is made using a properly designed tape, such as the spring-tension tape developed by Prof. Albert Barth from the University of Saskatchewan (Canada), named ReliaBull, which is shown in the figures above. Then, the sheath, prepuce and penis should be inspected to detect abnormal swellings, lesions or further problems; and finally, the internal accessory sex glands are examined by rectal palpation.

The collection method most used is the electro-ejaculation since it allows a semen sample to be collected immediately after the physical examination (figure 1). In the UK this procedure must be carried out by a veterinary surgeon and training in the procedure by an experienced operator is recommended to safeguard the welfare of the bulls. The bull should be separated from breeding females for at least 24 hours and preferably longer in order to obtain representative samples. And once the sample is obtained it should be taken straightaway to the field lab area for examination with a microscope (figure 2) for gross motility (scored from 1 to 5), and percentages of individual progressive motility and of morphologically normal sperm, which should be >60% and >70%, respectively. Visual appearance of the ejaculate is categorized as creamy, milky and watery. If bulls are being examined at <16 months the failure rate of their pre-breeding evaluation will be higher due to immaturity affecting semen quality, so it is recommended to wait until bulls are at least 18 months old. 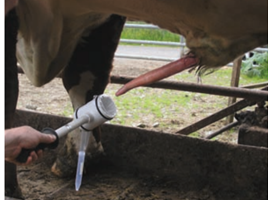 Figure 1.
Collection of semen by electro-ejaculation 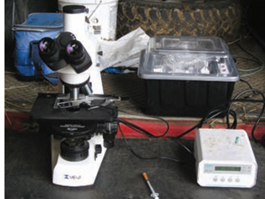 A bull will pass the mating ability test when he is able to successfully service a cow in heat within 10 minutes after introduction. However, this assessment is not commonly performed unless specifically required, since normal libido is not observed in young bulls, a single observation is maybe not representative. Therefore, the farmer usually needs to observe mating over a longer period, to be sure that bulls have a sufficient libido and are capable of breeding cows.